Life is Strange Wiki
Register
Don't have an account?
Sign In
Advertisement
in: Locations, Locations (Before the Storm), Episode 1: Awake Locations,
and 7 more
English

"Is this junkyard all I've got left?" — Chloe Price in "Brave New World"

American Rust is Arcadia Bay's junkyard, which appears in Life is Strange: Before the Storm.

It is featured briefly in Episode 1 and Episode 3. It is an explorable area in Episode 2. The junkyard originally appeared in the first game, Life is Strange.

After looking at people through the viewfinder at Overlook Park, Chloe and Rachel Amber walk along the train tracks and reach the junkyard. Shortly after, Rachel has a dispute with Chloe and leaves. Chloe then begins smashing everything in a rage, only to look up and realize she is standing in front of her dad's old, now rusty, car that has the left side completely smashed in. She starts crying, falls to her knees, and assumes the fetal position, eventually falling asleep. She has a dream of her being in William's car a second time when the crash happens. A truck slams into the side of the car and the dream ends. Chloe awakes, now in the backseat of the rusty car where she was in the dream, gets up and walks out of the junkyard to find Rachel.

After being expelled or suspended from Blackwell Academy and having an argument with her mother and David Madsen in which she learns that David is moving in, Chloe walks to the junkyard to presumably smash things up with the bat to blow off her frustration again. While at the junkyard, Chloe finds a rusty truck. After examining it and seeing the bad state of its battery, Chloe decides to find a new one to fix it, which she obtains from another abandoned truck nearby that previously belonged to a drug dealer and was seized and left at the junkyard unattended by the local authorities. After placing the battery in and realizing that it isn't enough to make the truck work, she decides to search for stuff nearby to spruce it up in the meantime. Once she finishes her task, Chloe sits in the truck and receives a call from Frank Bowers. He tells her they have business to discuss and arranges to meet at the junkyard.

Chloe falls asleep after a smoke break, and has a dream about her father. After waking up, she finds Rachel knocking on the truck's window, asking Chloe to let Rachel in. After Rachel puts a bag on the back of the truck, she suggests having a "therapy session". Chloe can talk about the fire that Rachel caused yesterday, David moving in, and getting kicked out of Blackwell. Once they finish, Rachel receives a text and tells Chloe she has to leave. Chloe reminds her that she forgot her bag, to which Rachel comments that it contains something for her. Chloe goes to a nearby brick building and proceeds to open the bag to see what's in it, finding out there is clothing inside. After changing clothes, she receives a text from Frank telling her that he's already at the junkyard. Chloe gets out of the building and sees the mysterious woman in white that was with Rachel's father yesterday at the park, getting out of Frank's RV. Chloe gets into the RV and Frank asks her to get a book in the back for him. She tries to ask him about the woman but Frank suddenly drives away from the junkyard, cutting her off mid-sentence.

Chloe heads to the junkyard after grabbing William's toolbox from her house, and starts repairing the mechanical parts of her truck. She succeeds, and takes the truck for a test drive around the junkyard before entering the newly found hideout to clean herself; she pulls off the cloth covering the mirror and looks at herself for a while before hearing Rachel searching for her. Rachel enters the hideout and comments on Chloe's blue streak. The two girls go on to check the truck and see Frank examining it. He calls the truck "nice wheels" and Chloe wonders why he is here so early. At this point Damon Merrick approaches them and Frank asks Chloe where the money is. Chloe has the option to give the money to Frank or keep it for herself. Damon grabs Chloe's arm ans warns her that she should be careful when talking to him, and gets pushed away by Rachel. The topic changes to Sera; Damon asks why are the girls interested in her, and Chloe can either say that she's a friend, or that it's not Damon's business. Either way, Frank tells Chloe to stop asking questions and is about to leave with Damon, but Rachel demands further information. Chloe calls Rachel by name and Damon turns around, realisation dawning on his face. He takes out a knife and threatens Rachel into telling him what her father is up to and how he is connected to Sera. Frank tries to calm Damon, but Rachel takes a piece of wood and hits Damon in the face, causing him to respond by stabbing Rachel in her brachial artery. As the blood stain on Rachel's arm gets bigger, Chloe puts Rachel in the truck and drives to the hospital, with Frank holding an angered Damon back.

There are many objects which Chloe can examine throughout the junkyard in Episode 1 and Episode 2:

PC users: Hover over the text to see Chloe's comments. See here for all interactions in the game.

Chloe alone in the junkyard ("Awake") 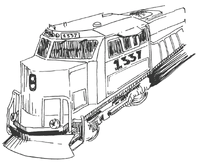