Life is Strange Wiki
Register
Don't have an account?
Sign In
Advertisement
in: Locations, Locations (Season 1), Locations (Before the Storm),
and 9 more
English

"So maybe Arcadia Bay will actually turn out to be the island of treasure and adventure I've been looking for..." — Max Caulfield in her diary on August 18, 2013

Arcadia Bay is a fictional, picturesque seaside town in Oregon, United States, and the setting of the original Life is Strange. It reappears in the prequel game and very briefly in Life is Strange 2.

Arcadia Bay was originally inhabited and founded by Native Americans, as mentioned by Ms. Grant when she speaks of the settlers living peacefully with one another after their arrival. Its main source of commerce was fishing which - according to a fisherman - is no longer feasible due to the Prescott family's business practices.

In Life is Strange, which is set in October 2013, the town is experiencing strange weather and other phenomena that is somehow linked to Max Caulfield's time-controlling abilities.

A freak snow flurry and an unexpected eclipse end Episode 1 and Episode 2, respectively. The reoccurring deaths of animals are seen throughout Episode 3, and an ominous double moon appears at the end of Episode 4. In Episode 5, Arcadia Bay's fate is in the player's hands as the town can be destroyed by the tornado in Max's visions, or it can be saved by going back to the beginning of the game and allowing Chloe Price to get shot by Nathan Prescott.

In Before the Storm, which is set in 2010, three years before the events of Life is Strange, a forest fire is started by Rachel Amber.

The town makes a brief appearance in the first episode of Life is Strange 2, which is set in October 2016. It is seen in a cutscene from an overlook. If Chloe was sacrificed back in Episode 5 of the original game, the town will be lit up, and the lighthouse will be rotating its light. If Arcadia Bay was sacrificed, the town will appear abandoned, and the lighthouse will be half destroyed from the storm (as we see happen to it in Max's visions). Toward the end of the cutscene, an information plaque can be seen more clearly. Depending on the above circumstances, the plaque will either be painted with a memorial or it will describe the town.

Note: The events of the comic series, based on the original game, are not intended to be a true ending continuation, as emphasized by the writer.

The comic series, continues the Sacrifice Arcadia Bay ending. It shows Arcadia Bay has been destroyed. However, it is also revealed that the Prescotts and the Prescott Foundation have chosen to contribute money to the relief effort and rebuilding. 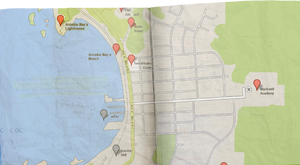 Map of Arcadia Bay in Life is Strange 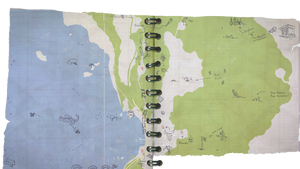 Map of Arcadia Bay in Before the Storm

Arcadia Bay has a rich and varied ecosystem. In regard to flora, a beautiful lush coniferous forest surrounds the town in every direction except the West, where the bay meets the Pacific Ocean. As for fauna, it ranges from bears, snakes, coyotes, wolves, whales, squirrels, butterflies, insects, to different types of birds and the various deer that can be seen throughout the episodes of the original game.

The name "Arcadia" was deliberately chosen for the symbolism it bears. Arcadia is a utopia introduced in Greek and Latin mythology, which is full of flowers, fruits, and forests. In an interview writer, Christian Divine explained that “it just sounded more peaceful and mystic, and the word ‘Arcadia’ has all these connotations that would be fun to play with and contrast with the darkness that’s actually going on in the town. It has all these different representations and metaphors that you can look in to and work with.”[1]

"Even in Arcadia, there I am."

The developers conducted research on the setting by traveling to the Pacific Northwest — particularly the Tillamook Bay area — for the purpose of conveying a nostalgic and autumnal feel to the game. The development team visited the region, took photographs, looked at local newspapers and used Google Street View to make sure the environment was accurately portrayed.[2] 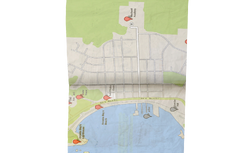 Map of Arcadia Bay in Life is Strange.

Map of Garibaldi from "Visit Garibaldi".

Position of the fictive town of Arcadia Bay based on just one of the in-game coordinates found in David's files. (Google Maps Screenshot) 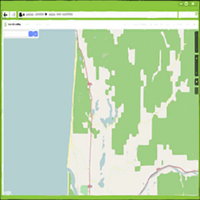 Map of Arcadia Bay by the lighthouse 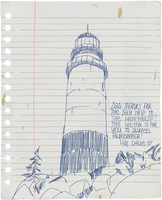 Drawing of the lighthouse by Chloe 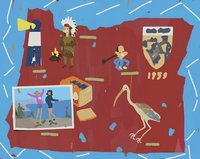