Ashly Burch (born June 19, 1990) is the voice actress for Chloe Price, Taylor Christensen, Stella Hill, Sarah and the weird lady in Life is Strange. She is a well-known up-and-coming voice actress, singer, writer and performer. Due to the SAG-AFTRA voice acting strike, she wasn't able to reprise her role in the prequel Life is Strange: Before the Storm, but served as a writing consultant. However, she later returned to voice Chloe in the Farewell episode.

Now well-known for her work on Life is Strange (2015), Ashly has had other voice acting roles in video games, most notably as Tiny Tina in Borderlands 2 (2012) and as Cassie Cage in Mortal Kombat X (2015). She has also recently been featured in Bethesda's Fallout 4 (2015) as Tina De Luca, Rowdy and Cricket, as Aloy in Horizon Zero Dawn (2017) and as Parvati Holcomb in The Outer Worlds (2019).

She also performed several characters in animated cartoon series, including Cass in Bee and PuppyCat (2013-2014), and various voices in Adventure Time (2014-2015). She is also a story line writer for the popular Cartoon Network series.

Ashly is also well known for her involvement in the gaming web series "Hey Ash, Whatcha Playin'?" (HAWP), which she does together with her brother Anthony.

She won the award of Best Gaming Performance for her role as Chloe Price in Life is Strange, in the Golden Joystick Awards 2015.

In December 2015, Ashly worked for the first time as director on the latest episode of RocketJump! The Show, "Fan Friction".

She also played the main character in the web series Muzzled the Musical which aired from October 26, 2015.

In 2019, she joined the cast of Mythic Quest, an Apple TV+ comedy about the production of video games.

In February of 2020, it was announced that Ashly is a member of the Legend of Vox Machina writing team set to release in Fall of 2020.

In 2017, Ashly returned to work on the Life is Strange prequel Before the Storm as a writing consultant to help provide consistency and authenticity for Chloe's younger version due to her love for the game. However, she is not giving Chloe her voice this time as she is participating in the strikes.[1] However, on November 30 it was revealed that Ashly would voice Chloe in the bonus episode "Farewell".[2] Ashly stated herself that she did not participate in writing the bonus episode.[3]

Ashly Burch stated that she suffers from anxiety. (To Be Continued)

"I grew up when YouTube was kind of becoming the goliath that it is now. And it's easy to get sucked into wanting to make a viral video... I think you see a lot of stuff online that isn't made necessarily with love. It's not even to say that they're unsuccessful, but for me, the whole point of being into anything creative is because you love the process."[4] 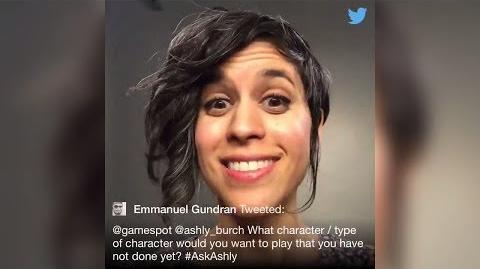