"- Why do you stick around, then?
- None of your damn business. But I'd be long gone if I had the chance, trust me."

— Cassidy and Big Joe in "Wastelands"

Joseph Costello Jr.[1], better known as Big Joe, is a character in Life is Strange 2. He is met by Sean and Daniel Diaz in Humboldt County, California, running an illegal cannabis farm alongside Merrill.

Big Joe is seen as a harsh and threatening man who can be easily angered. He is also impatient, seeing how he often demands people to do the things Merrill does quickly. That being said, he does have some ability of empathy, and will occasionally see issues in the demands of Merrill. He also seems to have a crude sense of humor, as displayed when he optionally interjects that Cassidy should "[visit] Uranus" at Merrill's house.[2]

Big Joe a is bald, sturdily-built man with a graying beard. He has blue eyes, and wears a black zipped vest and grey shirt.

Big Joe works alongside Merrill for a man named Teddy, who is implied to have a short temper[3] and constantly pushes up their deadlines.[4]

In the morning, Big Joe comes to the camp in his pickup truck to take Sean, Daniel, and the drifters to Merril's farm. Once arriving, he antagonizes Cassidy, which Sean can then choose to defend her. At the end of their shift, he takes them all back to camp.

The next day, as Merrill is about to give Sean, Cassidy, Finn, and Jacob their money, Big Joe drags Daniel into the room and claims he saw him snooping around the living room. Merrill rescinds their payment as punishment, fires Sean and Daniel, and orders Big Joe to "teach Daniel a lesson" before leaving. As Big Joe throws him to the ground and is about to attack him, Daniel uses his telekinesis to throw an ashtray into Big Joe's head. Big Joe demands to know who threw the tray; if Sean speaks up, Big Joe will punch him in the face before he can say anything more, giving him a black eye. If he doesn't, Finn will speak up instead, receiving the same punishment.

If Big Joe was woken up and Sean didn't sabotage his vehicles, he will enter the room after Merrill finds and confronts the group. If Sean stole the gun from the safe, he will take it from him after frisking him. If Cassidy came with Sean and left the group, he will bring her into the room. After Finn refuses to get on his knees, Big Joe shoots him in the leg. After Daniel activates his powers, Big Joe is thrown into a wall and knocked unconscious.

If he was woken up and his vehicles were sabotaged, he will not be able to go after Sean's group. Instead, he will call Merrill to inform him of the group coming, preventing them from reaching the safe even if Sean agreed to the heist and avoided all CCTVs.

It is unknown what happened to Big Joe after the explosion. He is presumably arrested after the police raided the farm.

"Look, I know you guys are having the time of your life here, but I am not. So shut your mouth and give me some quiet, for fuck's sake!"
— Big Joe to the drifters in "Wastelands"

"Bitch, bitch, bitch... nobody's making you babies work here... You guys are all the same... "Cool, let's be trimmigrants!" Then you barely work for a month... This is my life."
— Big Joe during the drifters' conversation in "Wastelands" 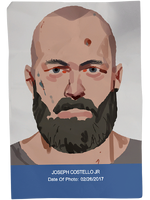 Big Joe driving his truck to the pot farm.

Big Joe entering the room after threatening the drifters outside.

Big Joe driving his truck with his dog, Roscoe.

Big Joe punching Sean or Finn in the eye.

Retrieved from "https://life-is-strange.fandom.com/wiki/Big_Joe?oldid=115838"
Community content is available under CC-BY-SA unless otherwise noted.