Life is Strange Wiki
Register
Don't have an account?
Sign In
Advertisement
in: Locations, Locations (Season 1), Locations (Before the Storm),
and 19 more
English

Life is Strange:
Episode 1: Chrysalis
Episode 2: Out of Time
Episode 3: Chaos Theory
Episode 4: Dark Room
Episode 5: Polarized
Before the Storm:
Episode 1: Awake
Episode 2: Brave New World
Episode 3: Hell Is Empty (cutscene)
Blackwell Academy is a senior high school located in Arcadia Bay, Oregon. The school specializes in Science and Arts and is currently overseen by Principal Raymond Wells. It appears in Life is Strange and Life is Strange: Before the Storm and is mentioned in The Awesome Adventures of Captain Spirit.

The following is what Max Caulfield wrote about Blackwell Academy in her diary:

"I GOT ACCEPTED INTO BLACKWELL ACADEMY.

If words could dance this would be a rave. Even though I've never been to one. But who cares because I GOT INTO BLACKWELL ACADEMY[, a unique and famous private school for seniors! NO KIDS ALLOWED]! I didn't think I would be so excited since it's not like I didn't used to live in the same town. But when I saw the text from the Blackwell scholarship office, I could literally feel my pulse speed up.

But Seattle wasn't like a fable. Au contraire. Now Blackwell Academy seems more exotic to me than any other place in the world. To study photography under Mark Jefferson... SIGH. Insert hearts and flowers. Plus there will be cool diverse students from everywhere. It won't be like my high school now..."

According to Michelle Grant, the school is built on old Native American land, shared between the natives and the early colonial settlers "in peace, not fear and violence."

The tribes who were in the area first had welcomed the settlers and both cultures "found a mutual symbiosis and thrived." There are some undisclosed fascinating facts about Blackwell, and Ms. Grant claims there's a lot of power in the region which she thinks "helps the creative juices flow."

In 1910, Jeremiah Blackwell founded the academy, striving for excellence among the student body. Jeremiah's statue resides at the front of the building, bearing the motto "The future needs excellence". In the Two Whales Diner, there is also a black and white flyer of Blackwell, boasting "Global Excellence in Arts and Science for over a hundred years and counting."

Blackwell is partially owned by, and financially funded by the Prescott family. In 1998, they donated the dormitory building to Blackwell.

Between the events of Before the Storm and Life is Strange: Season 1 (2010 - 2013), Blackwell Academy changes its curriculum and student body make-up. The narrative reasons for this that are explored via secondary plot-lines over the events of Before the Storm. Blackwell's change results in the hiring of famous art teachers like Mark Jefferson and the eventual shift to a specialized two-year extended senior program. Prior to this evolution, Blackwell Academy is a fairly standard private high school with four grades. For certain prestigious private schools, this fifth year can amount to college credit or can be seen as giving students a leg-up to get into a really prestigious arts education.[1] 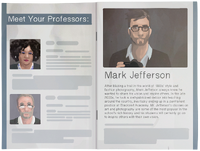 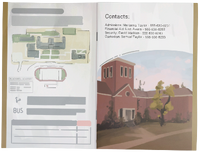 Within the Academy building there are several explorable rooms:

Outside the building, there are several main areas:

The layout of the campus can be seen on a map in the Madsen garage in David's surveillance cupboard.

Based on Chloe Price and alternative timeline Chloe's Blackwell report cards from 2010, the following teachers were at that time, or are still faculty members:

Clubs and Other Groups

27 optional photos can be shot around and inside Blackwell Academy locations, including the alternative reality and Max's nightmare.

7 optional graffitis can be drawn around and inside Blackwell Academy locations.

A well is something used to obtain water in large amounts. As water is important to human survival, it is associated with good things, hence the reason people throw coins down wells in exchange for luck.

The color black holds many negative connotations. It is the color of night and darkness (when people can not see and are therefore vulnerable), the color of bruises and body parts afflicted by frostbite, the color of ashes (which are the leavings of a fire, which can cause great harm), and the color of rotting things.

Hence we have "Black Well", or "Danger disguised as fortune". It is a fitting name considering that, despite being a school intended to give students opportunity and knowledge, Blackwell is a place where a lot of sinister and generally shady things are going on.

Blackwell Academy: Our past - Your future