"Those were the good old days. Man, I hate even saying that... but they really were..." — Charles in The Awesome Adventures of Captain Spirit

Charles Eriksen is the father of Chris Eriksen and widower of Emily Eriksen in The Awesome Adventures of Captain Spirit and Life is Strange 2. He is a former basketball player and coach, before turning to heavy alcoholism likely after his wife's death.

Charles is an alcoholic, a dependence likely developed after Emily's passing. His depression and addiction to watching basketball mean that Charles often leaves Chris neglected, causing Chris to do most of the housework and take care of his father at a very young age. Charles is discontent with his current job. He spends time at bars where he occasionally gets into fights. Charles' alcohol and anger management issues cause him to raise his voice, swear, and in some cases, verbally and physically abuse Chris, although he immediately regrets doing so in all depicted cases. He seems aware of his abusive behavior, but has a hard time admitting his abuse.[1]

Charles seems to have dedicated much of his time towards finding the culprit of the hit-and-run that caused Emily's death.

Charles Eriksen has blue eyes, close-cropped light brown hair with uneven side-swept bangs, and a light beard and mustache. During the events of Captain Spirit, he wears a black quarter-zip pullover with a short blue collar over a white shirt, worn-out navy blue jeans, black-and-white striped socks, and red closed slippers, as well as a golden wedding ring on his left hand. On the following Sunday during "Rules", Charles wears a navy blue sweatshirt over a blue shirt, the same navy blue jeans, and light brown boots. While outside, he wears a brown suede leather jacket over his sweatshirt.

During his high school and college days, Charles was a highly successful and popular athlete, having won several basketball trophies during his time. He attended Eugene State College, where he met and entered a romantic relationship with Emily Wyatt in 2005 after meeting her in a library during their finals. A year later, Charles married Emily on May 1, 2006 and conceived Chris soon afterwards, resulting in Emily's resignation from college in preparation for his birth. After graduation, Charles began working as a basketball coach for a public school within the Sunny Creek School District.

On December 16, 2014, Emily was hit by a car after being stranded on the road and died of her injuries. Her death likely caused Charles to spiral into alcoholism, seemingly causing the loss of his job and several of his friends. His firing in combination with Emily's funeral costs seem to have resulted in him having to move with Chris to a smaller household in Beaver Creek, where he found a job at a railroad company.

Soon after her passing, Charles devoted much of his time and resources to finding the culprit of Emily's death, including frequent letters, emails, phone calls to detectives, highway surveillance monitors, and police, the latest of which is dated to September 28, 2016.

On a Sunday morning during December, Charles cooks breakfast for his 9-year old son Chris and calls him down to the kitchen. During their conversation, Charles asks Chris how Chris is enjoying the eggs, how the bruise on his arm is doing (heavily implied to be caused by Charles himself), and about Christmas, leading to Chris asking him about picking out a pine tree like he promised. Charles tells Chris that they will buy a tree after the basketball game, promising not to fall asleep before then.

Several drinks afterwards, Charles falls asleep on the recliner during the game. Upon being nudged by Chris, Charles wakes up heavily inebriated and falls over twice, knocking over a table in the process. After Chris attempts to remind Charles of their conversation earlier that day, the doorbell rings, and Charles tells him to send whoever it is away. While resting against the couch, Charles listens in on Chris' conversation with Claire Reynolds and becomes more agitated once Chris returns, culminating in him directly blaming Chris for Emily's death. Upon seeing Chris begin to cry, Charles attempts to apologize to no avail as Chris runs outside, leaving Charles holding his head in his hands.

While Chris speaks to Daniel and Sean Diaz, Charles rushes out of the house and apologizes to Chris for his actions before noticing the two brothers. He gives them a cautious greeting before lifting Chris onto his shoulders and heading back inside.

The next day, Charles decides to make good on his promise to purchase a Christmas tree and prepares to leave while Chris and Daniel play in the living room. Upon exiting the bathroom, Charles announces that he's ready before noticing Sean, who came to their house to find Daniel. Charles invites the brothers to come along with them to the Christmas market, which Sean accepts after some reluctance. Charles then leaves the boys in the house to clean out his truck's back seat, and after Sean and Chris have a short conversation, he honks the horn to signify that they're ready to leave.

While at the market, Charles peruses the Christmas trees while Sean looks for a gift to get for Daniel. While there, Sean has the option of thanking Charles for bringing them along. After Sean is finished shopping, Charles gets into the truck and drives the four back home.

Upon arriving outside the Reynolds' house, Charles speaks with Sean in the truck as Chris and Daniel play tag outside. Charles asks Sean about the girl he saw Sean talking to at the market, then opens up about his wife's passing and his struggles with being a proper parent to Chris.

(If Sean got Chris to open up about his issues)

Sean has the option of asking about Charles' alcoholism and its effect on Chris. He can either tell Charles to get himself together or to find help, the latter of which causes Charles to consider taking up Emily's parents' offer to have Chris live with them for the time being. Either way, Charles thanks Sean for his honesty and promises to try to become a better father.

After Sean exits the car, Charles drives alongside Chris as they race back to their home while Sean and Daniel return to the Reynolds' house.

Chris will mention Charles in his letter to Sean and Daniel. If Chris was not hit by the police car and Sean spoke to Charles about his drinking problems, Chris will mention that Charles has been a better dad lately.

"Hey, I don't need a lecture from my son, thanks. I don't drink that much."
— Charles if Chris points out that he's drinking beer for breakfast in "Captain Spirit" (determinant)

"Hey, is your, uh...your arm...okay? Looks better. Anybody, uh...ask you about it or, uh...say anything at all?"
— Charles talking to Chris at the dinner table in "Captain Spirit"

"WHAT THE FUCK IS THIS?! Open your goddamn eyes! That was a goddamn carry!"
— Charles while watching the basketball game on the flatscreen in "Captain Spirit"

"Charles: Look, not everyone is born to be a basketball star. Not even me. You're probably gonna change the world.
Chris: I hope so.
Charles: I know so."
— Charles talking to Chris in an optional conversation after the game in "Captain Spirit"

"Hope you know that Daniel and Chris are a dangerous team... We'd better watch out, or they're gonna take over the world..."
— Charles to Sean in the Eriksen household in "Rules"

"When I look at you and Daniel... how close you two are... I realize I'm far from being up to the task. Chris deserves a real family."
— Charles to Sean in the former's truck outside the Reynolds household in "Rules" (determinant)

"I know I gotta do better. I can't let pain define who I am. Everyone has to go through some shit..."
— Charles to Sean regarding Chris' maternal grandparents in "Rules" (determinant) 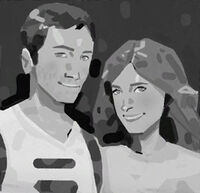 A college newspaper photo of Charles and Emily from 2005.

Charles and his old friend, Nick, at Westernland Park.