Life is Strange Wiki
Register
Don't have an account?
Sign In
Advertisement
in: Community, Before the Storm, Captain Spirit,
and 4 more

Community management takes care of the social social media representation, organizing community events and communicating with the fandom for the Life is Strange franchise.

Dontnod Entertainment has appointed two Community/Communications Managers for their own social media accounts: Anne Chantreau in September 2015 and Corentin Naud in December 2018.

Deck Nine Games appointed one Community Manager during development of Before the Storm in February 2017: Corwin Cantin.

Tobias (commonly known as Toby) Palm began working for Square Enix in March 2012 as a Senior Information Center Operator after having previously worked as a Research Analyst for Canalys. He later worked as a Community Executive for Square Enix before the community management for Life is Strange was split between him and Scott in June 2015. Toby was appointed as the main community manager for Life is Strange in December 2015 as Scott resigned.[2]

In February 2019, he was promoted to Senior Community Manager at Square Enix for the Life is Strange franchise.

Toby graduated from Royal Holloway, University of London with a Bachelor of Arts in politics and a Master of Arts in history. He speaks English, German, and French according to his LinkedIn profile.

Scott Alexander Blows began working for Square Enix in August 2014 as the community management for Life is Strange and Square Enix Collective after having previously worked as a Community Manager/Team Lead for Disney Interactive Studios. He introduced himself on the Life is Strange subreddit on March 2, 2015.[3]

Scott graduated from Chichester College for Graphic Design, according to his LinkedIn profile.

Her LinkedIn profile states she is "breaking new ground by becoming the first official Video and Content Creator for Square Enix in London." When she joined in 2018, she was creating content for the official Just Cause 4 YouTube channel.

Lucy graduated with a First Class Bachelor of Arts honours degree in June 2015.

Joshua Elkington began working for Square Enix in October 2017 as a Production Intern and started working on the Life is Strange franchise as a Communications Assistant in April 2018. He is currently a Global Community Executive for the franchise,

Roxane is also the Co-founder & Business Developer of Moonycat Entertainment - a video game studio based in Montpellier (France).

Anne Chantreau has been the Communications Manager at Dontnod Entertainment since September 2015 and manages correspondence and news across all of Dontnod's social media platforms. Prior to this, Anne had around 8 years experience in PR and community managing for Koch Media's video game label, Deep Silver.

Corwin has been an Associate Producer at Deck Nine Games since February 2017. He also manages the Community Manager Twitter account for the studio. (This account does not appear to have been active since the end of 2018.)

Corwin has an Associate's Degree in Writing/Directing from the Colorado Film School where, among other things, he script-supervised an Emmy-winning short film. 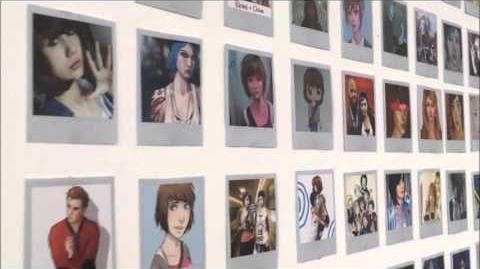