The Custodial Room is located to the right of the Prescott Dormitory entrance and is used by Blackwell's janitor Samuel Taylor.

Max Caulfield enters the room to crank up the sprinkler valve, which drenches Victoria Chase, Taylor, and Courtney Wagner, causing them to stand up and leave the stairs where they were sitting.

Max has a second opportunity to explore the room; she can find photos of Rachel Amber posing and a box labeled "Sammy's stuff". Outside, she can ask Samuel, who sits on a bench, about the photos. Samuel also keeps a missing person poster of Rachel Amber in his custodial room.

Max can enter the room once again as the door is not locked. Inside, she can find a scarf, a fashion magazine, a box with an empty paint bucket and several toolboxes.

Samuel's janitor room that can't be entered from the custodial room but very likely was originally meant to be an explorable area since there exists detailed concept art for the room.

Max entering the room in "Out of Time" 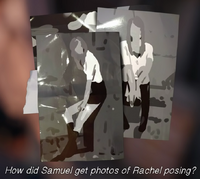