Life is Strange Wiki
Register
Don't have an account?
Sign In
Advertisement
in: Characters, Characters (Before the Storm), Male Characters,
and 9 more
English

"Why is it that chicks think it's okay to hit me, but if I lay a single finger on them, suddenly it's a whole other thing?" — Damon to Chloe and Rachel in "Hell is Empty"

Kyle Williams
Damon Merrick is a character in Life is Strange: Before the Storm. He is the owner of the local punk club in an old sawmill north of Arcadia Bay, which serves as a front for his criminal operations, and is the main antagonist in the game.

Damon has a renowned reputation for being extremely dangerous. He is quick to anger and is not above beating people who owe him money as was the case with Drew North. Based on Frank's comments, Damon has done a lot of bad things.

However, Damon is also shown to be respectful to at least one person and to value his friendships. He gifted Frank with a puppy and will show some concern about his friend Sheldon in dialogue with Chloe if she attacked him in Episode 1.

In Episode 3, he won't get angry at Chloe when she gives him reasons for attacking, merely saying in a slightly respectful tone that Frank was right about her.

Damon wears a brown leather jacket, and a shirt which is white, yellow or red, with blue jeans depending on the episode. He has many tribal tattoos on his chest and arms. He has slicked brown hair and a beard. He also wears a necklace, a watch, several wristbands and an ear-piercing. Damon also has a scar across his face. If Chloe decides to use the knife on him in Episode 3, he will get another scar on his left cheek.

The following is what Chloe Price wrote about Damon in her journal:

Give Damon the money

Spend a few minutes with Damon Merrick and you can tell that he's a peace-loving guy who gardens in his spare time and loves unicorns and rainbows. Oh, and hunting down anyone who owes him money. It's the simple pleasures.

Spend a few minutes with Damon Merrick and you can tell that he's a peace-loving guy who gardens in his spare time and loves unicorns and rainbows. Oh, and breaking people's kneecaps. It's the simple pleasures.

Honestly, I don't know a whole lot about the guy. I know that he collects on his debts, his name is written all over the mill and he might even scare Frank. I think they work together, but unlike Frank, he's got a bite to match his bark.

Everyone at the mill that night seemed to know him, but every time I asked someone about him, they clammed right the hell up. And you have to be a special breed of fucked up to scare any kind of sense into the criminal element of Arcadia Bay.

The one thing everyone will tell me? The guy is bad news.

Damon is first seen threatening a man who owes him money from a lost bet. If Chloe approaches the two, Damon will tell her to "mind her own business".

There is graffiti on the side of the mill that says "don't mess with Damon Merrick", and a betting stub on the ground showing that someone lost a bet and owes money to Damon.

When Chloe attempts to backtalk the bouncer, he will mention that his boss decides who gets in the club and who doesn't.

After Chloe spills beer on Sheldon Pike, she can ask Frank Bowers who he is. Frank will say that he works for Damon, who is a friend of his, and that the club is owned by him.

If Chloe looks through Frank's computer, she will see that Damon emailed Frank about how the Old Mill burned down and how he lost $10,000 dollars along with his dogs. He will comment that he will look for the "person" who started the fire and beat them up.

When Chloe is at Blackwell on her way to Drew's room, Skip will attempt to stop her, however at the end of the conversation Skip gets a radio call from Wells, informing him that an unidentified vehicle is in the parking lot. Although it could be considered an oversight, there is a chance that this vehicle belonged to Damon.

While Chloe is in Drew's room to steal his money Damon shows up and confronts him about owing him money and bemoaning the fact that sales of drugs are down of late. He will lose his temper with Drew and begin beating him. If Chloe chooses not to intervene, Damon will break Drew's knee (thereby ending his sporting career) and leaves with a threat to come after Mikey if the debt isn't paid. If Chloe intervenes, Drew will be spared most of the beating, and Damon will be satisfied with the debt being paid. His dialogue with Chloe will depend on whether she attacked the skeevy guys or not. Mikey North attempts to defend his brother only for Damon to break his arm. Damon will thank Chloe for giving him the money, threaten Drew and then leave. According to the file James Amber has on him, he is wanted for larceny, extortion, distribution, assault, robbery and murder.

Damon first appears alongside Frank Bowers when he meets with Chloe and Rachel. At first, he refuses to reveal Sera's location to either Chloe or Rachel, but when he learns Rachel is the daughter of the DA and plans to use her to blackmail James, Rachel attacks him with a piece of wood, knocking him to the ground. After a brief fight, Damon stabs Rachel in the arm. He is then attacked by Frank, distracting him long enough for Chloe and Rachel to escape.

Later, Damon is texted by Chloe, whom he thinks is James. He reveals that he has captured Sera and forces Chloe to cooperate, destroying evidence against him and finding the informant in his gang as well as retrieving his ransom money.

Damon is seen with Sera as Chloe enters the old mill. If Chloe got the knife, she can cut Damon's left cheek. Furious with Chloe's deception, he hits her and beats her to the ground. Damon then injects Sera, but fortunately doesn’t kill her. Frank confronts and attacks Damon once again. Damon kicks Chloe in the head and begins to fight Frank as Chloe passes out.

It is heavily implied that Damon was killed by Frank, as Frank is seen alive and well at the end of the game with Damon's knife. Frank is also seen pouring a sip of beer to the ground during the ending cutscene of Episode 3, which usually is a way of mourning your lost brothers. The alcohol poured to the ground symbolizes the drink the dead person would've had. Frank also puts Damon's knife into a box with a picture of him and Damon, Damon's picture having blood stains all over it, which implies that he killed him. A shovel is also seen in the background, hinting that Frank has buried Damon.[1]

"Good luck running on that knee, now. Bye-bye, football. Well, I'm done. Get my money, or maybe it'll be your little brother I talk to next. See you soon."
— Damon to Drew in "Brave New World"

"You heard what happened to Drew, right? Maybe try keeping that in mind when you talk to me."
— Damon to Chloe in "Hell is Empty"

"See, you two Nancy Drews decided it would be a good idea to call your drug dealer and ask about his business. I didn't go to a fancy academy, but that doesn't strike me as smart."
— Damon to Chloe and Rachel in "Hell is Empty"

"Whatever James told you, Sera doesn't deserve this. She didn't do anything wrong." - "You think I give a shit about what she did? My job is to make problems go away. And she's the problem."
— Conversation between Damon and Chloe in "Hell is Empty" (Determinant)

"Whatever James promised you, he's a liar and a cheater. He'll screw you over the first chance he gets." - You think I'm a fucking idiot? James Amber came to me because he was desperate. And now I'm squeezing him for all he's worth."
— Conversation between Damon and Chloe in "Hell is Empty" (Determinant) 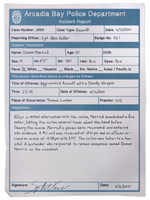 Graffiti at the punk club. 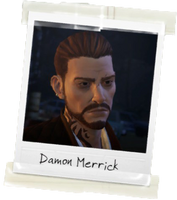 A photo of Damon and Frank from the latter's RV.