"I don't need any club to be cool or have friends." — Dana to Max in "Dark Room"

Killed by the storm (presumed, determinant)

Dani Knights (ENG) (uncredited)
Yuka Adachi (JAP)
Dana Ward (born July 11, 1995) is a student at Blackwell Academy. She is a cheerleader who lives in the Prescott Dormitory. Dana is nice to Max Caulfield, supporting her relationship with Warren Graham. She is best friends with Juliet Watson and currently Trevor's girlfriend.

Dana reappears in Before the Storm, the prequel to the events of Life is Strange.

Despite her popularity and Vortex Club membership, Dana is a nice and empathic person who cares for others disregarding their social status. She criticizes the Vortex Club and sometimes wishes she would be a loner like Max. She also seems to be a good and supportive friend. She also is a dedicated cheerleader evident by the posters and decorations in her room.

Max sees Dana in the hallway outside the Science Lab talking to Justin Williams as Max makes her way to the bathroom after Mr. Jefferson's class and comments on her popularity. On her way back to the bathroom to save Chloe Price from Nathan Prescott, Max sees Dana again and wishes she could tell someone what was going on.

Later, in the Prescott Dormitory, Max goes to get Warren's flash drive, but sees a sticky note saying that Dana borrowed it to watch movies while she studied.

Just as Max heads towards Dana’s room, Juliet Watson emerges and locks Dana inside, demanding that Dana “tells the truth”. Dana listens through the door as Juliet tells Max about Victoria Chase's claims that Dana sexted Juliet's boyfriend, Zachary Riggins. When Juliet finishes, Dana talks to Max through her door, saying she's innocent, and to look for proof in Victoria's room.

Once Max proves to Juliet that Dana is innocent, Juliet lets her out and Dana forgives her friend, also saying Juliet has to do her laundry. Inside her room, Dana thanks Max for helping out, expressing her disbelief at Juliet’s actions. She then explains that not everyone in the Vortex Club gets along, saying that Victoria creeps her out and that she wouldn't let Zachary touch her. Dana says it’s a good thing Max is a loner, but comments on how Warren obviously likes her.

If Max finds Dana's pregnancy test, and then rewinds so Dana doesn't catch her, she and Max talk about a ‘rumor’ Max heard. Dana confesses that she was pregnant. She may say that it was a mistake and implies that she either had an abortion or miscarried. This seems to be verified by the clinic note on her table. Dana then hints at the identity of the “deadbeat dad”. After the conversation, Dana compliments Max’s spirit, then playfully teases her about the flash drive so Warren has an excuse to bug her.

There is a letter from Logan Robertson in Dana's room that says he would help Dana out financially, implying he was the father. (Max later confirms this, hoping this jackass will use protection next time.) The text of the letter is as follows:

Dana I suck at writing but I thought I should write this so you might not hate my dumb ass forever.

I know I act like a tough jock around everybody but I never had to act around you, I'm not the kind of man you deserve. You saw how I pussed out.

if you need any money, let me know.
XO Logan

There is also a best-selling maternity book by Dr. Bill, a syndicated radio host, along with a clinic note. Dana had a doctor's appointment on October 2nd at the Center for Women's Health that was related to "Fertility, Pregnancy & Childbirth".

On Tuesday morning, Max receives an e-mail that Dana sent out to all of her classmates about the upcoming Halloween party, which causes Max to comment on how Dana loves Halloween even more than she does.

As Max makes her way through the dorm to take a shower, she sees Trevor not so discreetly leaving Dana’s room, and writing on her slate. Dana is enthusiastically and joyously dancing on her bed, and Max thinks about how she’s never seen Dana so “bouncy and happy without a pot of coffee”.

When Dana sees Max, she quickly tells Max that she’s feeling better than the previous day, and she’s glad they talked. She also comments about how Max seems to be psychic. She then tells Max that Trevor asked her to the Halloween party. She’s happy that she and Trevor are now showing their faces in public, and insists that Max should come with them, as a “cute geek couple with your bitch, Warren”.

After Max expresses some doubt, Dana strongly encourages her to come to the Halloween party. If Max says she’s not going to go, she expresses her disappointment, saying Max came to Blackwell to discover herself. If Max says she will go, Dana compliments her spirit, and says that after the party, Max will be ready for a rave.

When Max arrives for her photography class with Mr. Jefferson, Dana is in the room posing for Taylor Christensen, Hayden Jones, and unknowingly Daniel DaCosta.

When the entire school is standing outside the Girls Dormitory at Kate Marsh’s suicide attempt, Dana and Juliet are holding on to one another, looking very distraught.

Later that night, Dana writes several emails expressing that she feels truly sorry and remorseful for not having done more to support Kate and not having been a better friend like Max, and that she's still in shock and mourning or even traumatized by the image of Kate jumping. In a text to Dana, Trevor tries to comfort her and thanks her for always being there for him, and Dana responds that he's as good for her as she is for him. She also receives an email from Juliet requesting some information regarding Kate's incident, but Dana declines her request for the time being, as it's better to keep a low profile at the moment, especially in respect of Kate. She also writes on Max's social media page either thanking her for her heroic saving of Kate or reassuring her for her hard effort despite Kate's death.

As Max is sneaking out of the dorm rooms, Dana will call her into her room. If Kate survived her suicide attempt, Dana will thank Max and ask her why she thinks Kate would try to take her own life.

Regardless of Max's response, Dana will mention to Max that Victoria Chase left the dorms earlier that night.

While Max checks the Dormitory for Nathan's room, she can examine Trevor's room. He and Dana can be heard inside the room, and Max seems disgruntled by their obvious illicit activities there.

Dana later can be found in the VIP section of the End of the World Party dancing with Trevor. If Max asks her if she knows where Nathan is, Dana will say that she hasn't seen him that night. Dana adds that she should avoid him "if she wants to have fun" (possibly due to drama), but she knows quite a bit about Nathan and his family suggesting they have hung out before. Dana also invites Max to dance with her and Trevor, an offer Max rejects.

She appears in the diner sequence of Max's nightmare, standing near the entrance to the bathroom Max exits from. She regrets not being able to dance if Max decides not to save her.

Dana talking to Justin at the beginning of Episode 1

Dana talking to Max in Episode 1

Dana talking to Max in Episode 2

Dana dancing on her bed in Episode 2

Dana talking to Max in Episode 3

Dana dancing with Trevor at the party in Episode 4

Dana talking to Max at the party

Dana in Max's nightmare in episode 5

Sketch of Dana by Daniel DaCosta 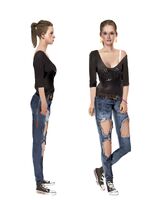