The Doe is a recurring entity that seems to guide Max Caulfield throughout the game. It appears in "Chrysalis", "Out of Time", "Dark Room", and determinant in "Polarized".

The doe spirit leads Max towards the bench near the lighthouse during her second vision of the storm hitting Arcadia Bay and disappears as Max gets close to it.

The doe is mentioned in conversation between Max and Blackwell Academy's janitor, Samuel Taylor when she confides in him that a doe in the forest seemed to be looking right at her like it was trying to communicate. He tells Max that what she saw was her "Spirit Animal" and that there's nothing weird about that except that she saw hers. He goes on to tell her that his own spirit animal is a squirrel.

Max sees the doe once again when she is in the junkyard with Chloe Price. When she wanders off to collect bottles for Chloe, the doe appears directly over the burial site of Rachel Amber (which is unknown to Max and Chloe at this time). The doe moves up the hill towards the grassy area of the junkyard. Max can follow and take an optional photo, but if she moves too close to the doe, it runs off into the bushes.

Max and Chloe discover Rachel Amber's body in the junkyard after deducing its location from her photographs in the Dark Room. The doe is watching from a distance as Chloe cries over her dead friend's shallow grave. It bows its head and fades away.

Max sees the doe as it leads her towards the girls bathroom at Blackwell during her nightmare.

In the "Sacrifice Arcadia Bay" ending, three does can be seen, which are free and standing among the ruins and run along the road.

The doe makes an appearance on Max's clothing throughout the game: In the first episode, she wears a pink shirt with the word "Jane" to the left a silhouette of a doe ("Jane doe"), both in white. The second episode shows her wearing a white shirt with a doe printed in color, seen from its side. In the final episode, although it is not a doe specifically, it is still the skull of a deer that features on a red shirt.

In the "Sacrifice Chloe" ending, Max can be seen wearing a doe necklace.

In the living room of the Madsen household, there is a photograph of David Madsen next to a dead deer that he is believed to have hunted and killed. In the garage area, there is taxidermy of a deer head mounted on a wall, perhaps the same deer that featured in the photograph.

There are many theories surrounding the true meaning of the doe in the game. One theory is that the doe is believed to be Rachel Amber in spirit form. This seemed likely considering that it appears over her burial site, and again when the body of Rachel is discovered. This interpretation is supported by comments made by the co-directors of the game in their commentary with regards to the subtle hints and clues given to the player in the game (the doe being linked to the burial site of Rachel, and so on). However, it is also possible that Rachel's spirit animal is that of the blue butterfly, due to the fitting traits for that animal in comparison with the doe (i.e. pretty appearance, free-spirited, etc).

Another likely theory is that the doe is Max's spirit animal sent to guide her through her time-travel ordeal. It leads her to the burial site days before the discovery of the body, and it bows its head in peaceful reverence for the dead when Max and Chloe find the body. Due to the doe shirt designs that Max wears (as well as doe necklace during one of the game endings), Max clearly has a connection to this animal, and so the doe could be her spirit animal instead. Another fact that lends more support to this theory is that the doe seems immune to Max's rewind power. Only Max and the doe seem to share this immunity. The doe also guides Max on two occasions: during her attempt to reach the lighthouse at the end of Episode 1 and during a short part of her nightmare in Episode 5. Samuel says that the doe is Max's spirit animal and that it could be a sign about her destiny when she tells him that a doe was looking right at her like it was trying to communicate. It makes more sense that the doe would be Max's spirit animal based on Max's personality traits than those that are learned about Rachel, making it likely that it is Max's true spirit animal or totem.

It could also be that these two theories are linked and that the spirit of Rachel appears in the form of a doe due to this being Max's spirit animal.

Max taking the optional photo ("Out of Time")

The doe waiting for Max in the junkyard 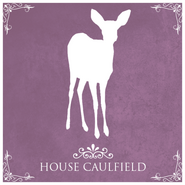 "House Caulfield" - a Game of Thrones parody by Square Enix that was posted on the official Life is Strange social media accounts.[2]