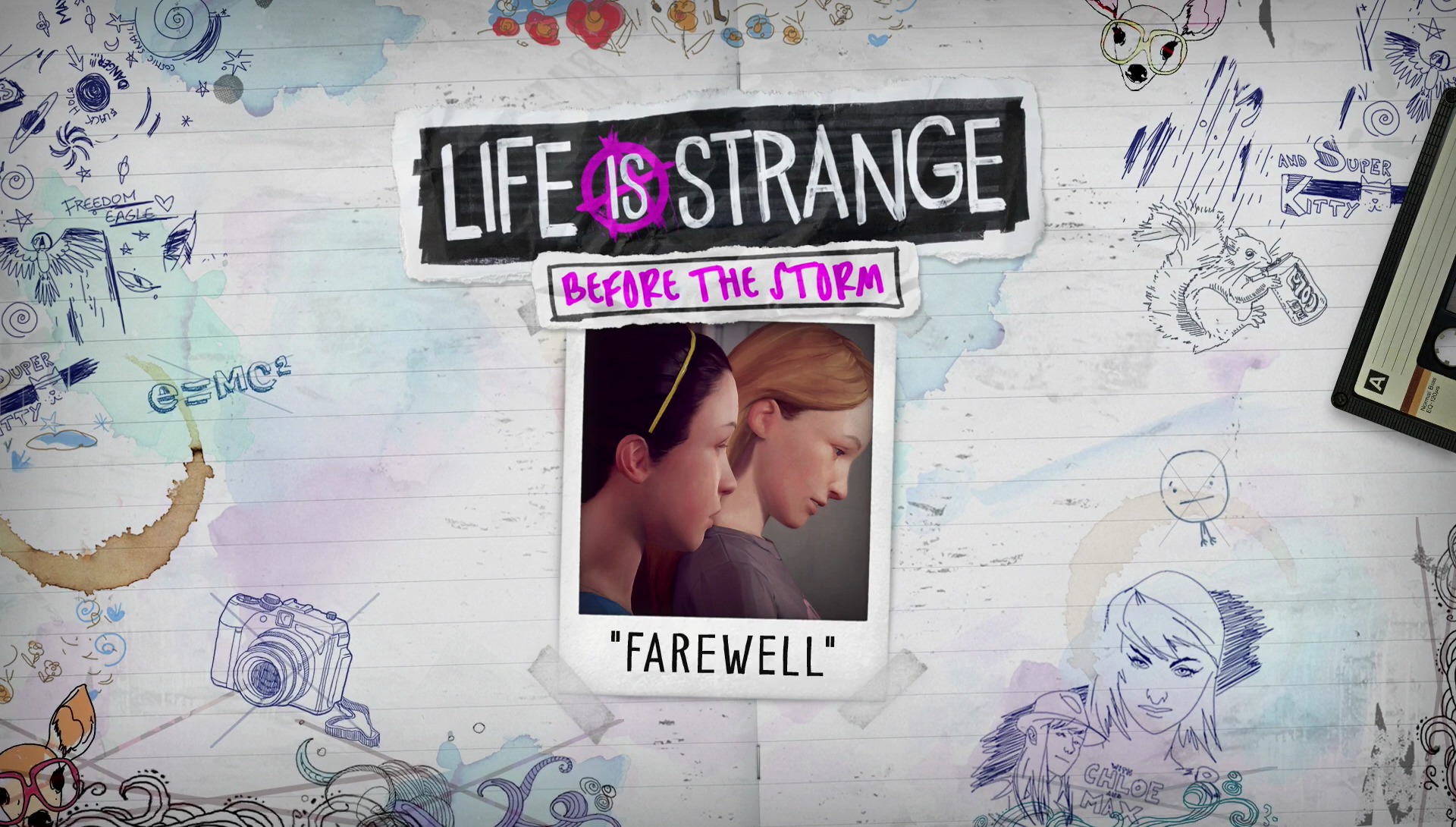 "Farewell" is a standalone bonus episode released on March 5, 2018, only available as part of the Deluxe Edition and boxed editions of Life is Strange: Before the Storm that takes place when younger Max and Chloe are together shortly before Max moves to Seattle with her parents. The player controls Max Caulfield, the protagonist of the original Life is Strange, for a final time.[1]

The original voice actresses Hannah Telle and Ashly Burch reprised their roles as Max and Chloe.[2]

It launched alongside the boxed standard[3] and Limited Editions of Before the Storm, which released on the same day in the US and on March 9th in PAL territories and includes a download code to unlock the bonus episode.[4]

A young Max Caulfield is at the home of her best friend Chloe Price. After blowing up some dolls with explosives, Chloe has been told by her mother to get rid of the junk in her room, so Chloe decides she may as well clean it at the same time. Max looks around the room and discovers many mementos from their years of friendship, which Chloe refuses to throw away. She finds a Polaroid camera that belongs to Chloe's father, William Price, which she can use to take optional photos. When Max asks Chloe why her dad's camera is in her room, Chloe tells Max that her dad said she could bring it up there for Max to use because he's tired of watching her drool all over herself every time he uses it - "his words."

After giving up on throwing away the junk in Chloe's room, Max knows that her family is moving to Seattle in three days, and she still hasn't told Chloe about this yet. Max is worried about how to tell her best friend and is looking for the right opportunity to raise the subject. She can try to tell Chloe in her room but is interrupted by Chloe either way and plans to tell her later.

Chloe finds an old cassette tape that they made as a message to their older (current) selves. On it, they are playing pirates and mention an amulet and a treasure map. Chloe grabs their old sketchbook of pirate drawings. The map is missing, but Max finds it inside an old textbook. The instructions include a telescope - which Chloe goes to find downstairs in the garage - and an amulet that Max (reluctantly) searches for in the attic. Max can explore around and find emails, in which Chloe's parents apply for scholarship and are concerned about her being at Blackwell due to an incident. She finds the attic door in the second-floor closet and uses a box, a stool, and a stack of books to reach it. Once in the attic, she must move some furniture to get to the amulet. After finding it, she can see Chloe in the backyard through the attic window, who will then see Max and tell her to come down. The girls then attach the amulet to the telescope using tape (in which Max has the opportunity to leave a flower on the grave where Bongo, Chloe's cat, is buried) and use it to discover the location of the "treasure." They dig up the treasure which turns out to be a time capsule of memories.

Inside the capsule are various things that they once played with along with a tape from "Bloody Bill" (who is William) congratulating them. Max can play a message on the answering machine from a fellow student's mother about the incident at Blackwell that her daughter and Chloe were involved in. Chloe can reveal that she turned on a Bunsen burner near the other student in an act of anger after the student made fun of her clothes and called her a scholarship kid.

Max can now succeed in telling Chloe about moving to Seattle after they have finished examining the time capsule or still delay telling her at this point. If she does tell her, Chloe reveals that she already knew, having overheard their parents talking about it and that Max is moving away in 3 days.

Shortly afterwards, Chloe's mom, Joyce Price, arrives home accompanied by Officer Anderson Berry, grieving and based on knowledge of the original game, informs Chloe the terrible news that her father has been killed in a car accident. Both of them, together with Max, break down in tears upon hearing the incident. A burial service is held and shortly afterwards Max is sorrowful being driven away by her parents as she watches Chloe and Joyce through the back window of the car. The car is loaded with belongings, indicating they are bound straight for Seattle. Chloe comes home and heads slowly upstairs to her room to find a note with "I'm sorry" attached to her cassette player. She plays the tape inside to hear a message from Max. The message varies depending on whether Max chose to tell Chloe about moving to Seattle or not.

Max didn't tell her about moving to Seattle:

"Hey... Chloe... this is Max. I have to tell you something. I know that I should have before, and I... I didn't mean to not tell you. I just... never found time until... Chloe, I'm moving to Seattle. We're leaving today. My dad got a job there and... I don't know when I'll be back. I didn't want to go! It wasn't up to me and it was all so sudden and I still kind of can't believe it's really happening... I'm sorry that I didn't tell you. I'm so, so sorry. I hated thinking about us being apart, and I-- I didn't want you to have to think about it, too. I didn't want to see you sad. Chloe, listen. Even if I never--even if we're moving for good... Chloe-- You're my best friend. I will always, always love you. Goodbye."

Max told her about moving to Seattle:

"Hey... Chloe... this is Max. I guess I just wanted to leave you one more message. Because I know this was the absolute worst time for me to go. I thought maybe if you heard my voice it could be a little bit like I was there. I don't know, maybe this was a dumb idea. I would give anything to be there with you now. It's so hard, trying to say what I'm thinking. If I could just see you... But we'll get good at it--great at it! We'll write and talk all the time. And then you'll come visit and it'll be like I never left. I mean it, you don't have to worry about anything changing. You're dealing with so much other stuff. You don't deserve any of this. Chloe, listen. Even if I never--even if we're moving for good... We're always together, okay? Even when we're apart. We're still Max and Chloe. I will always, always love you. Goodbye."

Chloe breaks down as she listens to the message before embracing the recorder, curling up with it in a fetal position as if holding Max to comfort her in her grief.

The time on the dining room clock in the original game during the baking scene when Max goes back in time displays 4:30 (with the assumption of this being PM). Deck Nine states that the baking scene from the original game takes place before their Farewell episode begins, but the digital clocks in Chloe and Joyce's rooms display much earlier times. According to Deck Nine, the digital clocks we see in Chloe and Joyce's bedrooms in Farewell are to be considered accurate, whereas the analog dining room clock we see in the original game (and Farewell) is not. Here is the explanation for this from Deck Nine Games' writer Felice Kuan who had received input on this reply from Lead Writer Zak Garriss, Square Enix, and the other writers:

"The clock in [the original game] definitely says 4:30, but we took as canon that it's breakfast and it's supposed to be late morning. We met several times about how to resolve this issue, and ultimately decided on the explanation that the downstairs clock is simply set wrong. The correct amount of time (2 hours) elapses on the downstairs clock, but for the accurate time, only the upstairs clocks are reliable. The timeline for Farewell is as follows: The scene from [the original game] occurs and William departs. The girls go upstairs to clean/play dress-up/mess around, during which time William is killed. While the girls are doing all the time capsule stuff, the police are on the scene, contacting Joyce, etc."
— Felice Kuan, Writer, Deck Nine Games.[note 2]

Some unused audio and subtitles exist for objects missing from the game and its files. The nature of these items suggested that the garage was originally intended to be an explorable location. This has been confirmed by Deck Nine.

"Yes, the garage was cut for pacing/length. None of the assets you mentioned went beyond script level (i.e. they weren't made). This includes the detergent and coffee mug. The items you mentioned are actually the remaining ones after we found homes for most of the other assets planned for the garage."
— Felice Kuan, Writer, Deck Nine Games.[note 2] 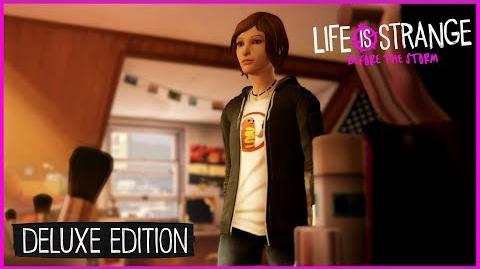 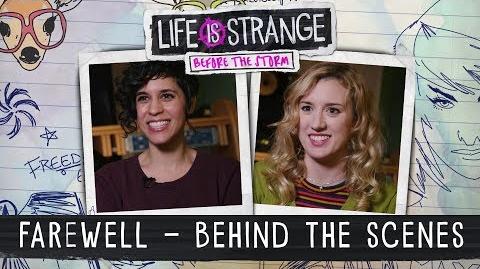 Farewell - Behind the Scenes 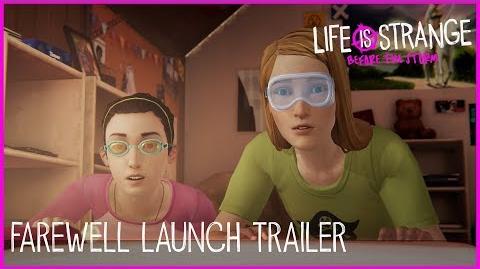 Life is Strange Before the Storm - Farewell Launch Trailer PEGI