"No more loans. I'm not your fucking piggy bank." — Frank to Chloe in "Awake"

He originally appeared in the first game, Life is Strange.

The following is what Chloe Price wrote about Frank in her journal:

For a drug dealer, Frank Bowers is actually pretty chill. He likes to act like he's a tough guy, and I have no doubt that he's a done a few messed up things over the years. But to me he's like a scruffy dog: The tougher he tries to come off, the cuter he seems.

I've been buying weed from Frank for close to a year. I almost never have enough money to pay him, and he always tells me "It's the last fucking time, Chloe. I'm not your fucking friend." Then he always gives it to me anyway. Like I said, guy's adorable.

Of course, if I ever did anything to actually get on Frank's bad side, he might not seem so cuddly anymore. I hear Frank rolls with some dudes who are into way darker shit than keeping high schoolers medicated. It's hard to imagine Frank getting mixed up with anything really bad, but I guess you never know.

For now, I'll just keep hoping that Frank is even worse at remembering who owes him money than he is at being intimidating.

Not much is known about Frank before the events of Before the Storm apart from the fact that he was once a student at Blackwell Academy.

Frank is first seen lounging and smoking on a sofa in a run-down building that has been converted into a punk club. When Chloe appears in the club and approaches him, he reminds her that he knows her name because she's bought "pot" from him every month for a year. He may or may not supply Chloe with more pot, depending on whether she asks for it and if she has the money to pay for it. Later on, he intervenes to protect Chloe and Rachel Amber when they are being chased by two men in the club; he blocks the two men, allowing Chloe and Rachel to enter the mosh pit where the band, Firewalk, are playing.[1]

Frank is seen again briefly at the end of the episode drinking a beer and watching the forest fire.

Frank calls Chloe and meets with her in the junkyard. The two drive off in his RV and he asks Chloe to fetch his account book. Once Chloe brings it to him, she can ask Frank about the woman seen exiting his RV. Frank becomes defensive and even if Chloe wins the backtalk challenge he will be vague with the details, only saying that her name is Sera and she has been causing trouble.

Frank tells her that Drew North owes his boss $1,000 and won't answer his phone. Frank asks Chloe to fetch it from Drew's room at Blackwell. Frank offers her a 10% cut and agrees to drop Chloe's debt if she hasn't paid him off already. Frank then leaves Chloe at Blackwell.

Frank texts Chloe back later and his tone will depend on whether Chloe gave the money to Damon Merrick or not. If she gave him the money Frank will reassure her that she did "the right thing". If she kept the money or let Drew keep it Frank will be upset.

Frank's file is seen in the Ambers' house; he is listed as one of the people affiliated with Damon Merrick.

Frank is seen at the end of the game in his RV with Damon looking over his account book. Frank looks uneasy around Damon.

As Chloe goes to meet Damon in the burned mill, Chloe sees Frank's RV with blood on the door, implying that Damon stabbed Frank. Frank later appears in the mill with a stab wound near his shoulder to face off to Damon. Frank and Damon have a fight, which later reveals Frank has killed Damon.

Frank is seen at the end of the game burning Damon's items over a campfire. In the background, albeit not clearly, a mound of dirt can be seen, indicating a recently dug grave for Damon.

Concept artwork of Frank from the limited edition's artbook.

Frank fighting Damon in the junkyard ("Hell Is Empty").

Frank upon entering the old mill ("Hell Is Empty").

Frank pouring a beer out for Damon ("Hell Is Empty").

A photo of Damon and Frank from Frank's RV.

A photo of Frank in James' office. 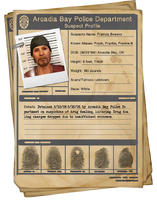