Life is Strange Wiki
Register
Don't have an account?
Sign In
Advertisement
in: Article stubs, Crew, Concept Artists,
and 4 more

Gary Jamroz-Palma (born January 28, 1984) is a French senior freelance concept artist and illustrator active since 2008, working at DONTNOD Entertainment since 2009.

He has created concept arts for all video game projects DONTNOD has worked on including Remember Me (2009), Life is Strange (2013) and was Senior Concept Artist along with Florent Auguy for Vampyr (2015). He is currently working on the second season of Life is Strange.

Vortex Club Party at the Swimming Pool in "Dark Room" 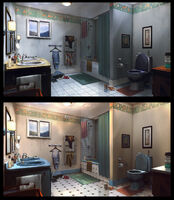