Life is Strange Wiki
Register
Don't have an account?
Sign In
Advertisement
in: Characters, Season 2, Characters (Season 2),
and 5 more

"We all got scars of our own. I just fucking hate phonies... too many here... Crusty backpack doesn't make you one of us." — Hannah to Sean in "Wastelands"

Hannah Reyome is a character in Life is Strange 2. During Episode 3, she is met by Sean Diaz and Daniel Diaz at a campsite in Humboldt County, California. She is part of a community of drifters and has worked as a trimmer (or trimmigrant) at an illegal cannabis plantation for many years.

Initially, Hannah seems quite stand-offish and unpleasant towards Sean but is generally friendly with others she has known longer at the camp, although she does tend to argue with Cassidy. She hates fake people and feels Sean is merely posing as being part of their "family." Later, she appears to soften towards him and apologizes for taking things out on him.

Hannah has brown hair and brown eyes, the left of which has a burst blood vessel. She has a number of tattoos decorating her face and body, as well as ear and face piercings. She wears a worn, black t-shirt with a camouflage design; brown overalls with three black patches; and maroon boots with mismatched red and black laces, as well as a necklace with what appears to be a black bar attached.

Hannah does not appear to be shy about her body, as she is seen to walk around the camp topless one morning, much to Sean's embarrassment. She normally wears a stern expression, though she can occasionally be seen smiling after befriending Sean.

Hannah's mother was an artist and a drunk whom she tried to get into rehab countless times. Hannah worked in order to buy her mother paint and other supplies, but she later discovered that these were being returned to the store to get cash to spend on booze. She left home to get away from her alcoholic mother, fearing that she would end up like her if she stayed.

Hannah had a dog called "Blackflag"[note 1] that she regretfully left back in Colorado when she was running away from cops with Finn and Cassidy and then jumped on a train, leaving Blackflag running behind, unable to catch up. She hopes the cops picked him up and gave him a better home, but she still thinks about her dog every day.

According to Daniel, she is a Navajo.

After Sean exits his tent at the drifters' camp, Hannah walks past him while topless and greets him before continuing on towards the camp's shower. Later on, while Sean is speaking with Penny and Ingrid, Hannah can be seen heading back to her tent after finishing her shower.

While riding on Big Joe's truck towards the pot farm, the group of drifters begins to speculate on Big Joe's origins. After Sean chips in, Hannah sarcastically comments that they're all in love with Big Joe. At the pot farm, Hannah is sent by Merrill to trim weed buds inside his house alongside Sean, Daniel, Ingrid, and Cassidy. While they work, Hannah and Cassidy begin to argue over the latter's constant complaining about her desire to leave. After Big Joe returns, the two apologize to each other, with Hannah saying that it's been "a long, crappy week".

Back at the campsite, Hannah can be found peeling potatoes by the campfire while arguing with Ingrid and Anders over whether homeless people should be held responsible for the state of the environment. Sean can choose to join and help her peel the potatoes and talk with her afterwards. If Sean helped Hannah with the potatoes, she will reveal more about her life prior to joining the drifters and how she met them; if he didn’t, her responses will be shorter and less detailed.

That night, after Cassidy finishes her rendition of "I'm Willing", Hannah reminisces over her lost dog, Blackflag, prompting Finn to launch a game of who can tell the worst memory. After the game, Sean has the option of going to bed with Daniel or staying at the party. If he stays, Hannah watches Finn give Sean a haircut and, despite interjecting along with Cassidy partway through, compliments the new hairstyle after its completion. After stating that she doesn't want to drink too much in case Finn wants to visit her tent later, Sean suggests that the two are a couple, causing the group to start laughing and Finn to explain that they have only have casual sex. After Sean shares his opinion and his stance on his own sexuality, Hannah decides to head off for the night; before doing so, she asks Finn whether he's going to come over, and he will either accept or deny based on his level of intimacy with Sean.

The next morning, while Sean races towards Big Joe's truck after waking up late, Hannah can be seen joining in as the others chant his name. That night, Hannah can be found sitting with Daniel and Jacob by the campfire at the Diaz brothers' going-away party. If he chooses to speak with her, Hannah asks him about what happened with Big Joe.

If Sean turned down the heist, Hannah will run into Sean and Cassidy after their return from the lake. If the two went into Cassidy's tent, Hannah will amusedly ask them if they had sex, which they confirm. Hannah then tells them that she's been wanting to talk with Finn but couldn't find him, causing Sean to realize they've gone through with the heist and rush away to stop them.

After being interrogated by Maria Elena Flores in the Sacred Hope Hospital, Sean can examine a collection of mugshots including Hannah's. Should he choose to examine hers, Sean mentally apologizes to Hannah for ruining her found family. In certain versions of Cassidy's letter to Sean, it is revealed that Hannah was released after being interrogated by the police alongside Penny and Cassidy before being released. With Finn gone, Cassidy writes that Hannah and Penny "aren't the same" and the three have begun to fight too often, and that she isn't sure the group will remain together much longer.

"Shit, you're all in love with Big Joe. You can't stop talking about him, I swear..."
— Hannah to the drifters on Big Joe's truck in "Wastelands"

"Then go! Take the fuck off! If we're a family, we stick together! You're on the bus... or off the bus..."
— Hannah to Cassidy in Merrill's house in "Wastelands"

"Tell me again how many hours you spent on a plane during your awesome trip around the world? And then you come crying about hobos spreading garbage in the forest? [...] Now you're here sponging off us trash. On an illegal pot farm. With a tourist visa. Lecturing us. Funny, right?"
— Hannah to Ingrid and Anders while peeling potatoes in "Wastelands"

"You can't be part of our family unless you open up. This is a family too... Not a pit-stop. Out in the wild, sharing is caring."
— Hannah to Sean after peeling potatoes in "Wastelands"

"You feel us, Sean? Or do we sound like depraved punks to you?"
— Hannah to Sean at the campfire in "Wastelands"

Concept artwork of Hannah in her everyday clothing.

A digital render of Hannah's model.

Another digital render of Hannah's model.

Hannah, Cassidy, Penny, and Finn in a group photo. 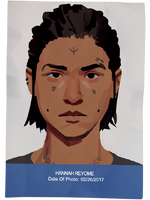 Hannah talking to Sean before her morning shower ("Wastelands").

Hannah apologizing for picking a fight with Cassidy ("Wastelands").

Hannah speaking with Sean after doing her chores ("Wastelands").

Hannah listening to Sean and Daniel's story by the campfire ("Wastelands").

Hannah speaking with Sean at the party ("Wastelands").