Life is Strange Wiki
Register
Don't have an account?
Sign In
Advertisement
in: Article stubs, Characters, Characters (Before the Storm),
and 11 more
English

"Not after what she'd done. Not after all the people she hurt, all the lives she destroyed. I told her she'd been given the greatest gift in the world... the chance to be your mother. And she squandered it. It... pained me to hurt her like that. But I'd do it again... and again, and again, to keep you safe." — James to Rachel in "Hell Is Empty"

Patrick Finerty
James Amber is the father of Rachel Amber and a crooked district attorney. It was revealed that the game's story is about Chloe Price and Rachel Amber uncovering a "dark family secret"[1]. He serves as the secondary antagonist of "Before the Storm." [2]

From an outside perspective, James Amber is a seemingly calm and collected individual with a solid home life and a loving family. Upon further investigation, it is revealed that he is anything but transparent and has lasting demons from his past relationships that dictate his two-sided personality.

James Amber has dark brown hair, with white streaks on the sides and green eyes. He wears a black suit with a white shirt and a blue striped tie in "Awake ", a black polo shirt with gray stripes and khaki pants in "Brave New World ", and a khaki suit with the same shirt and tie from "Awake" in "Hell is Empty ".

You can't trust normal people. Just ask Rachel. Her dad seems like the most "normal" guy on the planet, but he also turns out to be a cheating dickwad. Come to think of it, maybe that is normal?

What sucks is that Rachel and her parents actually seemed to get along really well before. James is the new Distric Attorney in Arcadia Bay, which is the reason Rachel's family moved up here from Orange County. Despite his job, James doesn't act like an uptight law enforcer all the time, unlike some wanna-be father figures I know.

Whatever happens with Rachel's family, it still seems like she really does love her parents. And maybe that's all that matters? I'd certainly rather have a cheating dickwad dad than a dead one.

When Chloe and Rachel are at Overlook Park, James Amber can be seen meeting up with an unknown woman; they embrace, and then kiss.

At the end of the episode, he is seen talking with a cop and Principal Wells, most likely because Rachel didn't come home after school. He pauses to stare at the fire.

After the production of The Tempest, Rachel says that every year she gets birthday money--or rather hush money--from him. He doesn't think too highly of Chloe, and what she describes as her "progressive attitude" causes tension between the two and his wife at the dinner table which is eventually stopped by an outburst from Rachel.

James first appears in the beginning scene and explains that Rachel's mother, Sera, had struggled with a heroin addiction, and had chosen to receive payment checks monthly throughout Rachel's life rather than to see her. He covers up his meet with her in Episode 1, explaining that he was kissing Sera goodbye. This causes Rachel to be devastated. He is mentioned later during a meeting with Frank Bowers and Damon Merrick, to whom Damon recognizes Rachel to be his daughter. In Chloe's stage play dream sequence with William, he can be seen among the audience watching.

After Damon stabs Rachel in the arm, James meets Chloe at the hospital, asking about the confrontation, showing compassion to Chloe, thanking her for saving his daughter's life. After Chloe speaks to Rachel, who had just woken from the surgery, she asks Chloe to go to her father's office, giving her the password for the security alarm, and to find more clues on Sera.

During the investigation, Chloe learns that Sera had voided the checks, had attended rehabilitation and had taken necessary legal actions to make her deemed fit, and had an attorney threaten legal action for joined custody of Rachel. She then learns that James had texted with Damon, with a deal in order. After Chloe converses with Damon via text, she learns that James had offered to burn the evidence regarding a murder at the mill, to which she had to inform him of the snitch of the situation and take pictures of a stash of money.

She then learns that Damon has Sera, and upon driving to the mill, learns that James had made a deal with Damon to overdose Sera, that way Rachel would have no connection to her whatsoever as well as drop the curiosity being her mother would be dead. Damon had begun to beat on Chloe, and Frank then continued his confrontation with Damon, who had drugged Sera.

The scene changes to Chloe talking with Sera. She tells her to not tell Rachel about James' involvement, explaining that she couldn't get rid of her addiction and that Chloe would be "killing" James for Rachel. She explains that James did it because he is desperate but loves his daughter dearly, and provides much more than Sera ever will. Depending on Chloe's choice, if she tells Rachel the truth, Rachel's relationship with him will be shattered. If Chloe keeps Rachel from knowing the truth, she will believe her father's story, and probably rebuild her relationship with him.

"Chloe, I know we didn't exactly meet each other at our best this morning. But with you and Rachel becoming such fast friends, I insist you join us for dinner. Don't you agree, Rachel?"
— James to Chloe and Rachel in "Brave New World"

"It's imperative, in such troubled times as these, that we remember what is most important to us. Family. Family's not merely a gift. It is a responsibility. As such, those we love must be cared for. And never, ever taken for granted."
— James in "Brave New World"

"That's enough! You are not welcome here or around my daughter any longer! I know exactly what kind of person you are from the moment I saw you, and I let my wife's compassion get the better of me!" - "Oh, what kind of person is that?!" - "A delinquent. A broken girl from a broken home!"
— James and Chloe in "Brave New World"

"I was desperate. I didn't know what to do, s—so I made a choice. I was never going to let her harm you again."
— James to Rachel in "Hell Is Empty"

James looking at the fire ("Awake")

James talking to Chloe in the recliner ("Brave New World")

James and Rose talking to Rachel and Chloe ("Hell is Empty")

James and Sera with young Rachel ("Hell is Empty")

James holding Rachel in his hands ("Hell is Empty")

James thinking in the recliner ("Hell is Empty")

James and Rose in Chloe's dream ("Hell is Empty")

James approaching Chloe in the hospital ("Hell is Empty")

Closeup of James ("Hell is Empty")

James talking to Chloe in the hospital ("Hell is Empty")

James talking to Rachel in her hospital room ("Hell is Empty")

James having dinner with his family and Chloe ("Hell is Empty") 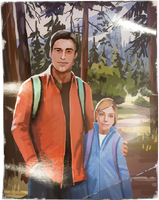 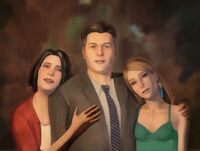 James with his wife and daughter.

James with his wife and daughter in Paris, France.