Life is Strange Wiki
Register
Don't have an account?
Sign In
Advertisement
in: Article stubs, Characters, Characters (Before the Storm),
and 6 more
English

Juliet Watson is a character in Life is Strange: Before the Storm.

She originally appeared in the first game, Life is Strange.

Juliet is playing Ariel in Blackwell Academy's production of The Tempest. According to her brief biography on the school's theater webpage, her "primary interests include journalism and social activism".

Roadblocks put in place due to the large forest fire create traffic and prevent Juliet from arriving to the production of The Tempest on time, forcing Chloe Price to take her place until she arrives. If Chloe has played the part perfectly, Juliet will joyously embrace Chloe in gratitude before going onstage herself. If Chloe flubbed all her lines, Juliet will cross her arms and contemptuously state that the performance was "interesting".

If Nathan Prescott panics onstage, Juliet will laugh at him along with the audience.

At the play's conclusion, she will bow onstage with Nathan. 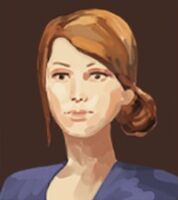