Kylie Brown (born October 1, 1998) is the voice actress for Rachel Amber in Life is Strange: Before the Storm.

Kylie had never heard of Life is Strange before she took the role, but the played it previously to her voice acting sessions.[1]

"I had never heard of it before now, but Life is Strange has literally changed my life, and I’ve told other people that I’m so thankful that is has come into my life. I get messages from people saying how much strength it’s given them in their life and their sexuality, and that’s such an amazing thing. I’m so grateful to have this opportunity where young girls or young guys that are just like, 'hey, this means a lot to me.' Just because of everything that’s happened, I absolutely love this game. I mean it’s my first big thing, and I’m glad that this thing has an impact on people’s lives in a positive way." "What I mean is that I obviously played Life is Strange and researched Rachel before recording so I knew what it was, but I didn’t know what it was, how big it was, until Rhianna showed me this fandom page she was on and I only then realized what I was getting into—and it kept getting bigger and bigger."

"Her voice is my voice [laughs]. No, but I didn’t have to do much to find her voice, it was mostly just connecting with the material or being in the emotion. A lot of the time Phil had me in a very sultry voice, so that’s where she lived mostly. A lot of the time he would look at me and I knew something mischievous was going to be coming, and he would say, 'Do that thing that you don’t like to do, but I like you to do because you’re good at it and it works,' and I’m like, goddammit, cause that means being sultry. Bring on the sexy voice!"

Her view on Rachel as a character:

"She’s a hurt person who’s going through something that none of us wanna go through. Like, you’re in high school and you might have found the love of your life, and you’re finding out that your dad’s been cheating on your mom with your real mom... so her entire life has been a lie. So she’s hurt, and people say she’s a traitor or she cheats or she’s not trustworthy. Everything leading up to her finding out about her father, she’s been nothing but googly-eyes towards Chloe. Yeah, she likes to play games, but she is a drama queen! Then after she finds out about her dad, wouldn’t it tear you up? Wouldn’t that tear you up to pieces where you’re not thinking clearly? I don’t see her as not trustworthy, I just see her as broken. The same as Chloe."

About connecting to her character:

"I had really bad anger issues as a kid. It’s something I still have but I have learned to keep inside, and it’s seldom now, but when I was a kid a lot could set me off. So, sad to say I guess that’s a part of Rachel I connect with. I mean I didn’t get physical, I didn’t throw any salad bowls. I didn’t start any fires!"

"I have never seen a fandom like that, so I’m honored that they have accepted me as their Rachel and I know I say that a lot but it’s true, I am. It was nothing like I thought it would be, or that it would be so big… because I didn’t know what it was!" 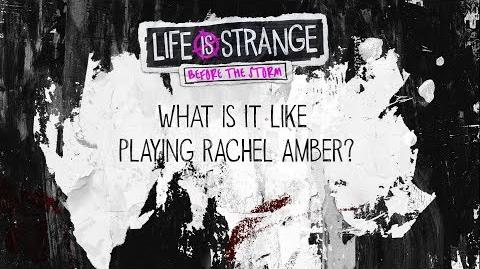 Kylie Brown - What is it like playing Rachel Amber?