View source
watch 02:17
New Pokemon Games - The Loop
Do you like this video?
Play Sound

Life is Strange: Welcome to Blackwell Academy is an officially licensed[1] book written by Matt Forbeck and published by Titan Books released on October 9, 2018. It is an "in-universe book that takes the form of a student guide to Blackwell Academy and the town of Arcadia Bay overlaid with notes, doodles and sketches from Max and Chloe".[2] It also features in-game illustrations such as posters, journal drawings, stickers, graffiti, as well as concept art.

The author has stated the work indirectly involved Dontnod Entertainment and Square Enix, as contact was conducted through his editor at Titan Books.[4] Although not directly involved with Dontnod, some feedback was provided by Michel Koch.[5] The hardcover version of the book is listed to have 160 pages.

"An atmospheric and characterful look at the world of the hugely successful video game Life is Strange, through the eyes of Max and Chloe.

Welcome to Blackwell Academy is an in-universe book from the Life is Strange video game franchise from Dontnod Entertainment and Square Enix. This detailed book takes the form of a student guide to Blackwell Academy and the town of Arcadia Bay. Overlaid onto the pages is graffiti: notes, doodles, sketches and photographs from the Blackwell students themselves, including contributions from the beloved protagonists Max and Chloe.

Welcome to Blackwell Academy includes information on the staff and facilities of Blackwell Academy, the people and locations of Arcadia Bay, overlaid with funny, irreverent and poignant comments from the students."

"Matt Forbeck has been a full-time creator of award-winning games and fiction since 1989. He has sixteen novels published to date, including the award-nominated Guild Wars: Ghosts of Ascalon and the critically acclaimed Amortals and Vegas Knights. His latest work includes the Magic: The Gathering comic book and the historical horror novel Carpathia."

The following disclaimer appears at the bottom of the credits page:

"The publisher’s choice of imagery and text for this book is not intended to canonize any particular story path from the games Life is Strange and Before the Storm. The publisher has used artistic license with timeframes to include written conversations between the characters. The book ‘exists’ before Max makes her final choice at the end of Life is Strange."

The book features a "Welcome Message" written by Sean Prescott who is introduced as a "pillar of the community".

"Welcome, one and all, to Arcadia Bay, the jewel of the Oregon Coast. My family may have been here since the town's founding, but one trait that every resident of this wonderful locale has always shared is their willingness to welcome new faces into the fold. From the Native Americans that originally called our sheltered bay home, to the town's proud residents today, we're always happy to see new people and invite them to enjoy our community.

Students are always especially welcome in Arcadia Bay--and not just because they bring outside money into the town! They also bring their curiosity, their passion, and their desire to make the world a better place. That's something the people of Arcadia Bay appreciate more than anything. In fact, that's exactly why Jeremiah Blackwell founded the school that bears his name one hundred years ago.

While Blackwell Academy may be the biggest draw for students admitted to that most prestigious school, Arcadia Bay itself has plenty of charms to enjoy, both for students and their visiting families. We have beaches on one side of us and mountains on the other, with miles of parkland all around. We have a charming main drag downtown, at which you can find everything from quaint shops and restaurants to upscale dining options too.

This is a wonderful place not just to go to school, but to vacation in as well. And most of all. it's a fantastic place to live. Peaceful, gorgeous, and full of kind people with ambitions beyond the borders of their homes. Join us here for a while and see if you don't agree."

The book features information on Arcadia Bay, Blackwell Academy and various other locations around Arcadia Bay, including the Two Whales Diner, (...)

"Come on down to the most popular restaurant in all of Arcadia Bay: the Two Whales Diner! We feature homestyle cooking guaranteed to drive those homesick blues away." (TBC)

The guide features a student profiles section that consists of "profiles of some of the most prominent and involved members of our student body", such as Rachel Amber, Victoria Chase, Steph Gingrich, Warren Graham, Michael North, Nathan Prescott, Chloe Price, and Justin Williams.

Taking artistic freedom, the book is expanding on the already established lore in Life is Strange by Dontnod Entertainment and its prequel Life is Strange: Before the Storm created by Deck Nine Games.

Additions made by author Matt Forbeck include: 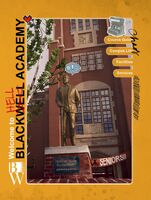