The Android version doesn't include graphics options (quality settings are adjusted automatically based on a device profiler[3]), however some settings can be adjusted via the "Engine.ini" file.[4][5]

On iOS the first three episodes were released on December 14, 2017, featuring an "enhanced user interface for full-touch screen integration", Unreal Engine 4 enhancements and optimizations, an in-app photo mode and exclusive iMessage stickers. An Android version and the other episodes were announced for early 2018.

On March 29, 2018, the final two episodes were released on iOS, Episode 1 became free (as on the other platforms) and the Android version was confirmed for release later in 2018, targeting Summer due to needing more time for polish.[6][7] The update's patch notes mention fixing issues relating to saving, loading, the iCloud saves and the photo mode now allows cycling between Max's skins and poses and additional photo settings. Simplified Chinese subtitles were also added to the game.[8][9]

On June 4, 2018, the Android version was announced to be available in July with all five episodes and Android exclusive controller support.[10] The game was listed on the Google Play Store with the ability to preregister.[11] An open beta was soft launched later that month, likely earliest on June 19th.[12] The Android version was released on July 18, 2018, worldwide.[13][14]

Prior to Episode 1 being also free on mobile (its price originally being $2.99), a trial version, which ends after hitting the alarm in the bathroom, was released for free as "Life Is Strange Lite" on December 14, 2017, and removed on March 29, 2018.[15] Player progress was carried over to the full version via iCloud.

"Life Is Strange is a five-part episodic game that sets out to revolutionize story-based choice and consequence games by allowing the player to rewind time and affect the past, present, and future.

Follow the story of Maxine Caulfield, a photography senior who discovers she can rewind time while saving her best friend Chloe Price.

The pair soon find themselves investigating the mysterious disappearance of fellow student Rachel Amber, uncovering a dark side to life in Arcadia Bay. Meanwhile, Max must quickly learn that changing the past can sometimes lead to a devastating future.

Exclusively on mobile, the game comes with Life is Strange iMessage stickers. Additionally, you can seamlessly share your progress on social media, and compare your own story choices with friends. An all-new photo mode allows you to take pictures like never before, modify them with filters and easily share them."

[This version includes Episode 1 of Life is Strange. The other episodes are available for in-app purchase. A Season Pass is also available [Episodes 2-5 bundle] which saves an additional 10% via the in-app "Play Episodes" menu.]

Common player review criticism seem to be bugs and the controls. Other players first impressions reported some minor differences of the port and a saving bug.[17][18]

Touch Arcade's review called the port "mostly great", praising Dontnod's "visual direction" as stunning and the touch controls as "great". It has "some low resolution assets but the overall feel is the same". Criticized was the still not properly lip synced dialog, some visual issues and the lack of proper controller support.[19]

Hardcore Gamers's review noted in the closing comments, there are "different technical issues, much like its console counterpart in 2015, but it's not enough to detract newcomers from experiencing its riveting narrative in full effect." The review praised the feature additions of "Photo Mode and bonuses like the iMessage stickers", concluding "Life Is Strange reiterates why fans need to rewind time and once again step into the shoes of Max".[21]

Apple's iOS "Editor's Choice" Award: "The fragility and fear of growing up. The terror of leaping into the unknown. Life is Strange tackles tough issues in a remarkable way, merging the superpowered and surreal with characters that feel authentic. You’re drawn into the adventure through gorgeous visuals. Sharp writing, excellent voice acting, and a compelling story make solving Life is Strange’s mysteries feel essential."

Android Authority's review noted that the iOS version suffers from less technical drawbacks and concluded that "while the episodic structure lends itself to casual play on the go", it is an "objectively better game on PC or console, due to the platforms' huge visual and technical advantages."[23]

Exclusively on Android, the game comes with full controller support."

According to the developer's website, these were the main challenges faced:

- To rewind time: Tap on the spiral icon in the top left corner of the screen and then tap on the fast-rewind or rewind icon.
- Fast rewind: Step back in time to your last important action, represented by a notch on the spiral.
- Rewind: Go back to a particular time.
- When you rewind, you remember facts and keep things you've picked up.
- When you rewind, you remain in the same location.

- Your current objective is always available in your Journal.
- The butterfly icon means your action will have consequences. You can rewind to change the outcome...
- "Speech bubble" rewind icon: This icon means you learned a useful fact that you may be able to use if you rewind.
- New entries in your Journal are indicated by a star symbol.
- Take all the remaining photos that match the drawings in your Journal.

The current version of the mobile game can be found in the top right-hand corner of the menu screen. 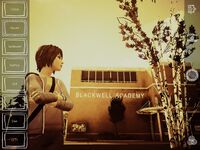 How to use the stickers. 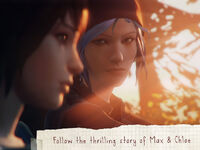 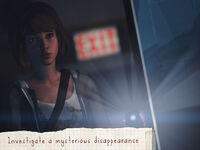 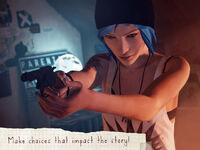 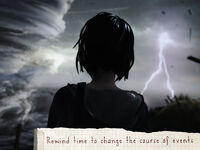 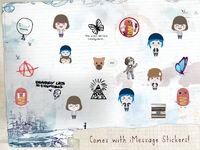 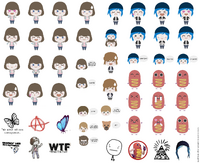 Montage of all stickers[26] 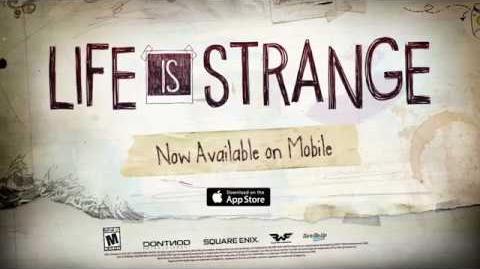 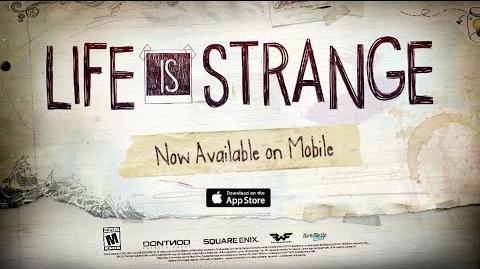 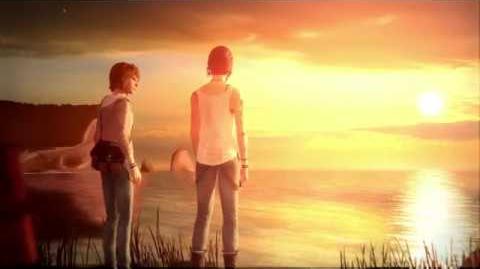 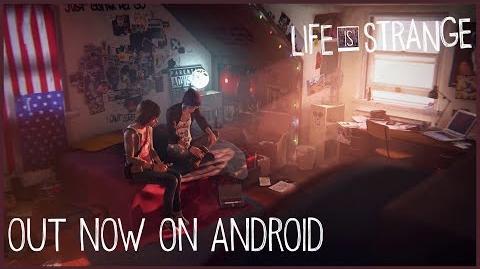 Life is Strange Out Now on Android ESRB 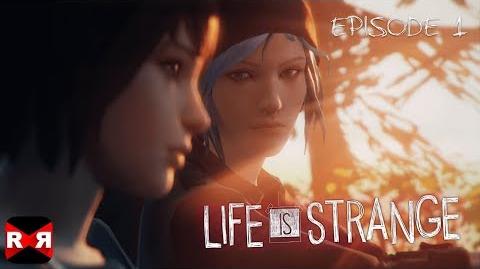 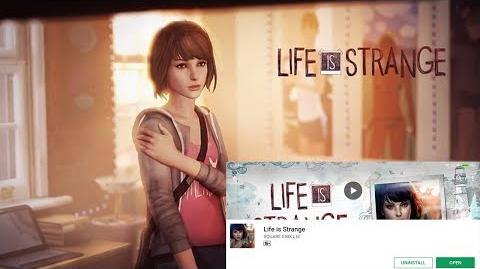