Megan Weaver was Chloe Price's close friend in the alternative timeline. She and Chloe spent a lot of time together after Max left for Seattle.

She also wrote a postcard to Chloe after her accident, sending her apologies, which proves their close relationship: 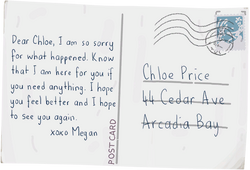 Dear Chloe, I am so sorry


for what happened. Know
that I am here for you if
you need anything. I hope
you feel better and I hope to see you again.

The two became more distant afterwards, Chloe feeling abandoned by her, commenting that after the accident Megan was "too cool for school".

In the original timeline, the name "Megan" appears on one of the red folders in the Prescott Bunker, which implies that Megan was a victim of the Dark Room Conspiracy. During the Extra Life Stream, it was confirmed that both Megans refer to the same person.

If the same is true in the alternative timeline, it could be a contributing factor towards her stopping attending school and abandoning Chloe after her accident.