"It's not like I wanna do this... The people I deal with are worse. But if you rip me off, you rip them off. Then I pay. I have a family to look after, too. I gotta protect them first."

— Merrill to Finn in "Wastelands" (determinant)

Jonathan Merrill[1], better known as Merrill, is the owner of the cannabis plantation and an antagonist in Episode 3: Wastelands of Life is Strange 2.

Merrill is shown to be a rather cold, argumentative, and rather strict individual. He harshly puts down and demands much of the people who work on his pot farm. He also shows tendencies of lacking the ability to seek forgiveness, as making "one too many mistakes", can get him to teach you a lesson. This also showcases him as abusive and threatening, given his implied connections to criminals because of his illegal business.

Displayed to care a great deal about his family, if their well being is ever threatened in his eyes, Merrill shows no issue resorting to violence if it means keeping them safe and protected. When pushed to that point, it's hard to talk him back to logic and reason.

Merrill is a bald African American man with a dark black beard. He wears a necklace, a black shirt with some jeans, and also glasses.

Merrill has a twelve-year-old daughter living in New York. Although he rarely gets to visit her, he continues to work on the cannabis farm because she needs the money he provides her with. If Sean asks whether he finds it hard, Merrill assures him that "it won't be forever".

Merrill works for a man named Teddy, who is implied to have a short temper[2] and constantly pushes up their deadlines.[3]

Merrill appears when he gives out assignments to Sean, Daniel, Cassidy, Finn and the other group members at the cannabis plantation. As the others begin working, Merrill moves Sean aside and warns him that he will fire him and Daniel if they mess up.

The following morning, as he is about to give Finn, Cassidy, and Sean their weekly payment, Big Joe catches Daniel sneaking into the back room. Merrill decides not to pay his employees for the week and fires Sean and Daniel. Before leaving, he orders Big Joe to deal with Daniel.

Later that night, he catches Sean, Daniel, and Finn (and Cassidy, depending on Sean's choices) breaking into his house and at gunpoint, forces them on their knees. Big Joe will join him if Sean didn't sabotage his vehicles. During the confrontation, he may kill Finn, shoot Daniel in the shoulder, or get tackled by Sean before being knocked out by Daniel's powers. The next day, he is seen unconscious along with the others, except Daniel, who has fled with his money.

Merrill survived the events that occurred at his house in Humboldt County but critically injured and under arrest by the FBI and local police. A mugshot of Merrill can be looked at by Sean and his full name is listed.

If Finn was killed in Episode 3. Merrill will be at the same hospital Sean is held in. Sean can spot Merrill sleeping in a hospital bed while he’s escaping.

"HEY! You guys still don't get it. This is work, not a goddamn summer camp. You're not special. There are dozens of hippies like yourselves begging for work at the next town. [to Daniel] Kid, your dad should teach you to shut your mouth."
— Merrill to his workers in "Wastelands"

"Next time your brother fucks up, you're both gone asap. Look. I'm not trying to bust your balls, but this is a pot farm and he's a fucking kid. You hear me?"
— Merrill to Sean in "Wastelands"

"I know. Ain't no place for children. That's why I keep mine in New York."
— Merrill to Sean in "Wastelands" (determinant)

"I thought you were different... smart. But you're a real dumbass for getting the kid involved... And you're teaching him how to steal. Thief and brother of the year. Nice! Whew, what now... You all really fucked up. I can't just let this slide. I can't... You're young but you can learn from mistakes... That doesn't mean your lesson's gonna be easy... or painless."
— Merrill to Sean in "Wastelands" 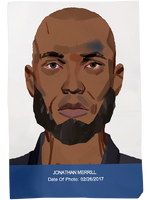 Merrill speaking to the drifters at the pot farm ("Wastelands").

Merrill speaking with Sean inside the pot farm ("Wastelands").

Merrill scrutinizing Finn after he jokes about getting a raise ("Wastelands").

Merrill lying still on his living room's floor in the morning ("Wastelands").

Retrieved from "https://life-is-strange.fandom.com/wiki/Merrill?oldid=114922"
Community content is available under CC-BY-SA unless otherwise noted.