Life is Strange Wiki
Register
Don't have an account?
Sign In
Advertisement
in: Article stubs, Characters, Characters (Before the Storm),
and 12 more
English

"Better to have died a hero than live as a coward." — Mikey North to Chloe Price in "Awake" (determinant)

Elamon (roleplaying character; by himself and Steph Gingrich)

Michael North, better known as Mikey (born December 27, 1996), is a character from Life is Strange: Before the Storm with whom Chloe Price attends Blackwell.

Mikey can quickly be described as more of a nerdy student. Like his friend Steph Gingrich, he enjoys tabletop games.

Mikey used to live together with his brother, Drew North, and his father, Anthony North. After losing his position at the shipyard following the Prescott Foundation's liquidation of the Arcadia Bay Marine Corporation, Anthony was forced to move back into his old apartment while Mikey was sent to live with Drew in his dorm room.[1] Seeing him struggle to find a new job, Mikey tried to help his father by having him promise to take a remedial skills class[2] and supporting Drew's efforts to collect money.

The following is what Chloe Price wrote about Mikey in her journal:

Mikey North is the captain of Steph's fan club, and the two of them can be found huddled around tables rolling twenty-sided dice whenever they have the chance. If life were one of those '80s movies Dad used to watch, Mikey would be the nerd that the jocks give wedgies to. In the real world, if someone messed with Mikey they'd be in deep shit. Mikey's older brother is Drew North, Blackwell's alpha jock.

The truth is, Mikey is one of the few genuinely nice people in this place, although every once in a while he says something that reveals a darker outlook on life. No idea where he gets it from. Maybe Star Trek? 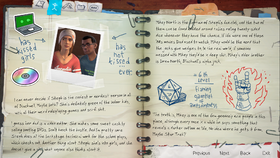 Mikey can be seen sitting with Steph in the corner of the Blackwell courtyard, playing a tabletop game resembling Dungeons and Dragons. When Chloe Price interacts with the two, Steph expresses interest in Rachel Amber, to which Mikey teases her for having a crush.

Should Chloe choose to join in on their tabletop game, Mikey will proceed to roleplay with the two.

After Chloe takes the money from Drew's dorm room, Mikey enters the dorm and expresses surprise at finding her there, closely followed by Drew. As Drew tells them to escape, Damon Merrick enters the dorms, searching for Drew in order to collect his debt. Drew tells Chloe and Mikey to stay quiet and leaves to talk with Damon. Soon afterwards, Damon can be heard beating Drew up for refusing to hand over the money while Mikey listens in horror.

Give Damon the money

Chloe opens the door and hands over Drew's money to Damon. As Mikey rushes to stop her, Damon slaps him away, causing him to fall and break his arm.

Damon continues to beat up Drew and breaks his knee in the process, then threatens to go after Mikey before leaving the dorms. Mikey opens the door and rushes to his brother's side, and Drew thanks Chloe for remaining silent.

While at the hospital, Chloe has the option of visiting Mikey's hospital room, where she informs him, Drew, and Steph about Rachel's fight with Damon.

While there, Chloe can play the tabletop game with Mikey, Steph, and Drew one last time. Near the end of the game, Chloe and Mikey's characters are cornered by opposing armies, leaving their only option of succeeding to be using a spell that will destroy themselves along with their enemies. With the capability to save only one of them, Chloe has the option of either letting them die together or backtalking Mikey into protecting himself while Chloe sacrifices her character. After the game, Drew offers to play another round with him while Steph thanks Chloe for bringing Mikey's spirits up.

While at the hospital, Chloe has the option of visiting Drew's hospital room, where she informs him, Mikey, and Steph about Rachel's fight with Damon.

"I am Elamon, wizard of the third circle, foremost advisor to King Tiberius, and sworn defender of Avernon."
— Mikey to Chloe while playing the tabletop game in "Awake"

"I have heard of you in the castle. King Tiberius owes you his life. It's an honor to fight alongside you."
— Mikey to Chloe while playing the tabletop game in "Awake"

"By my honor, I apologize. Here, take this potion as a gift."
— Mikey to Chloe while playing the tabletop game in "Awake"

"
— Conversation between Steph, Chloe, and Mikey while playing the tabletop game in "Hell Is Empty" (determinant)

"Thank you, Chloe. For everything."
— Mikey to Chloe while playing the tabletop game in "Hell Is Empty"

Mikey listening to his brother being beaten by Damon (determinant).

Mikey playing the tabletop game in his hospital bed (determinant).