John Nicholas Bowen, better known as Nicholas Durand, is the right-hand man of Lisbeth Fischer's community at Haven Point and the secondary antagonist in Episode 4 of Life is Strange 2.

As Lisbeth's right-hand man, Nicholas acts as an enforcer and likes to use violence over words. He can be best described as "inclined to pride" according to Lisbeth and is easily prone to have a violent temper, as he is not afraid to injure or threaten anybody who he deems as problematic, even going as far to threaten Sean at gunpoint. However, he is hesitant when it comes to killing anybody despite his violent demeanor. He is noted to remain in contact with white gangs, indicating that he held supremacist views in the past which he may still hold today.

Despite having never read the Bible, ironically, he is said to have a strong faith in Christianity.

He is also proven to be homophobic, as he calls Jacob a slur should he catch the latter in Lisbeth's office.

Nicholas is a tall, muscular man with black, neatly-combed hair and a strong jawline. He wears a white button-up shirt with rolled-up sleeves, brown slacks, and brown dress shoes.

In 1997, Nicholas was incarcerated in Salt Lake City for 11 years until his release in 2008 for reasons unknown. He formed connections with white gangs whom he still remains in contact with in the present. A newspaper clipping incuded alongside his file indicates that, as a teenager, he and two other teens drunkenly robbed, beat, and murdered a liquor store owner in South Salt Lake. He is a former meth addict, a topic which he dislikes speaking about.

As Sean Diaz watches Lisbeth's church service, Nicholas brings Daniel Diaz out onto the stage and watches in awe as he uses his powers to raise the cross above the audience. After Lisbeth takes Daniel away, Nicholas steps up to the podium and reminds the audience to donate to the church and participate in next Sunday's picnic raffle before telling them to save any questions for him outside.

Later, after Sean is brought down by Sarah Lee Hackerman to reunite with his brother, Nicholas takes Sean's backpack and forces him out of the church at Lisbeth's request. Outside, Nicholas tells Sean to leave and flashes his gun; if Sean tries to get up, Nicholas punches him back down before closing the gates and heading back inside.

As Jacob and Sean infiltrate Lisbeth's house, Karen Reynolds calls Sean and warns him that Nicholas is approaching the house; if they had raised the suspicion of Helen Miller or Derek earlier, she tells them that he spoke with them, while if they didn't, she tells him that he's holding some files and doesn't seem suspicious.

If Sean rejects Karen's plan, doesn't hide, or fails to clean up their evidence of being there while having not alerted anyone, Nicholas finds him and punches him and Jacob before dragging Sean to the church. If Sean accepted Karen's plan and hides, Nicholas leaves the room after hearing shouts outside due to the burning building. If Sean didn't accept Karen's plan, cleaned up the evidence, and hid, Nicholas searches through some files before leaving, unaware of the boys' presence. 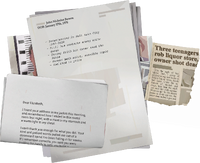 Nicholas looking over the church audience as Lisbeth prepares to introduce Daniel. ("Faith")

Nicholas watching Daniel raise the cross with his powers. ("Faith")

Nicholas telling Sean that Daniel no longer wants him. ("Faith")

Nicholas kneeling outside of the church alone. ("Faith", determinant)
Community content is available under CC-BY-SA unless otherwise noted.
Advertisement