Life is Strange Wiki
Register
Don't have an account?
Sign In
Advertisement
in: Gameplay (Season 2), Gameplay, Season 2,
and 2 more

"I should take a good look at the subject before drawing." — Sean Diaz during the first optional drawing in "Roads"

Optional Drawings are a gameplay mechanic in Life is Strange 2. Throughout each episode, Sean may encounter multiple locations where he may sit and draw pictures to varying levels of details using his sketchbook. Completion of a drawing will result in the sketch being saved to Sean's journal pages, and starting any drawing at least once throughout an episode awards the player with an achievement.

The drawing mechanic consists of two phases; observation and sketching. First, the player must take in their surroundings and memorize its details, which involves pointing the camera at a specific part of the scenery and holding down the A, X, or left mouse button. Next, the player must look down at their journal and sketch out the scene by moving their control stick or mouse until the sketch is done. This process is repeated several times, as the player's surroundings come into focus and their sketches become more detailed, until the drawing reaches its maximum detail variant. 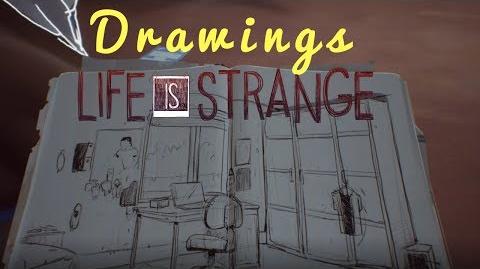 All of Sean's Drawings Life is Strange 2 Ep 4