— Chloe and Rachel in "Awake"

Overlook Park, also known as Culmination State Park, is an explorable location in Life is Strange: Before the Storm.

Rachel Amber takes Chloe Price to the overlook using the train. Rachel wants to play a game with the viewfinders and inserts her last quarter in one, which turns out to be broken. Chloe gets the quarter back by unscrewing a dedication plate from a bench and bending the metal off of the money container after having tried Rachel's nail file first. Afterwards, Rachel insists on playing another game, where they mimic people when looking at them with the viewfinder. When Rachel spots her dad kissing a woman with the viewfinder, she stops and wants to get drunk. She improvises and plays hurt near a picnic couple that brought wine with them on their picnic. Chloe reluctantly uses the opportunity to steal their wine in a backtalk challenge. Afterwards, they run to the overlook parking lot, where Rachel asks Chloe if she wants to drink with her. Then they go back on the train tracks to the junkyard.

On March 14, 1838, Ezekiel Blackwell and a group of Pentecostal settlers left Independence, Missouri for Oregon. On March 3, 1839, Blackwell's expedition arrived at Overlook Park. Upon seeing the Pacific Ocean from this location, Blackwell determined the expedition concluded and founded the town of Culmination. The group later returned south to found Arcadia Bay, so named for Blackwell's veneration for the area's natural beauty and desire to live in harmony with its native peoples.

Culmination Peak, renamed Culmination State Park, was designated as a state park in 1997 by order of Governor John Kitzhaber. 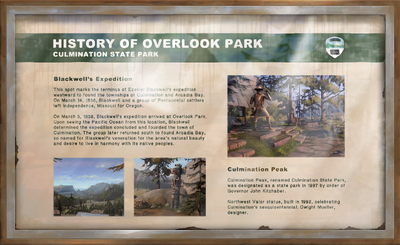 History of the Overlook Park.

Visitors to Culmination State Park can see the Northwest Valor statue, built in 1992, which celebrates Culmination's sesquicentennial. Dwight Mueller was its designer. 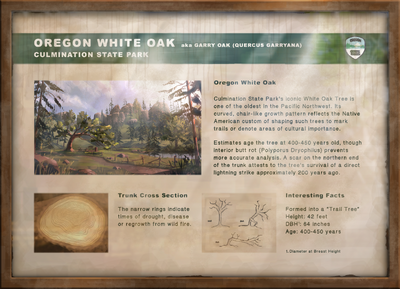 "The raven on this totem pole stands for transformation. Its grinning face betrays its trickster spirit. The raven has many ancient stories among the Salishan and other native peoples. Some say the raven helped create the first man. The raven is to be respected, never trusted." 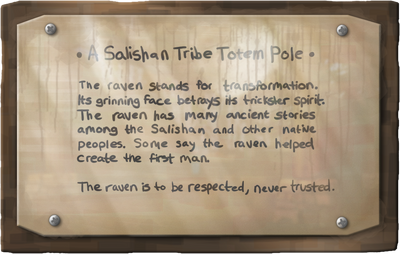 Located on a bench in the park is a dedication plate which says: "In Honor of Martin Lewis Prescott, Arcadia Bay's Greatest Son."

PC users: Hover over the text to see Chloe's comments. See here for all interactions in the game.

The view from the Overlook

A crow flying above the Overlook

Chloe and Rachel at the overlook

Main Menu at the beginning of Episode 1.

Main Menu at the end of Episode 1.