Life is Strange Wiki
Register
Don't have an account?
Sign In
Advertisement
in: Article stubs, Characters, Season 2,
and 6 more

"How you miss all those insects? How the fuck? The swarm is coming... bzzz..." — Penny to Sean at breakfast in "Wastelands"

Dean Mickael Baptist (born September 1st, 1995)[1], better known as Penny, is a character in Life is Strange 2. During Episode 3, he is met by Sean and Daniel Diaz at a campsite in Humboldt County, California. He is part of a community of drifters and used to work at an illegal cannabis plantation.

Penny displays several signs of paranoia, including his stated belief that the campsite is being spied on by government stealth drones and narcs to Sean and Ingrid. According to his voice actor, Orvalle Williams, Penny is a hypochondriac, and these two conditions were both caused by his constant use of cannabis combined with his lack of substantial food over the past several years.[2]

Penny has a short, dark brown Afro with blonde bleached ends. He wears a patterned, navy blue button-up shirt with half its buttons opened; white suspenders; and black trousers decorated with strips of duct tape, a patch depicting a pentagram, and white studs on the side of each calf. On his feet are dark blue buckled boots, the right of which has a red bandage wrapped around it.

Penny has several tattoos spanning across his body. His face has tattooed lines highlighting his cheekbones, running across the space beneath his eyes, and on his chin. On his chest is a tattoo of a stylized heart, and on his throat is the Eye of Providence. An anarchy symbol is tattooed onto his left arm, and two other symbols (?) are on his right. Written across each of his knuckles are the words "EPIC FAIL", and a spider web is depicted on the back of his left hand.

Penny is originally from Detroit, Michigan. While dumpster diving in New Mexico, Penny met a boy named Arthur "Jinx" Lee, whom he fell in love with. Jinx suffered from issues including mood swings, delirium, and self-harm, and once gave Penny a coin while telling him that he "never gave his trust to no one before".

On July 3rd, 2015, while at a pot farm in Blue Side Creek, Humboldt, Jinx wandered off into the forest while high and never returned. After searching for him to no avail, Penny kept Jinx's coin, hoping to meet him again and "hand him back the trust that he gave [him]". While still in Humboldt, Penny came across Finn, Hannah, and Cassidy and joined their group.

After waking up at the camp, Sean makes himself a cup of coffee and sits down with Penny and Ingrid, who are conversing about the government’s planned legalization of cannabis. After learning that Daniel went down to the lake with Finn, Sean finishes his coffee and leaves the table as Penny advises him to not swim in the lake because it’s “toxic”. As he’s leaving, Penny reminds Sean to make some more coffee for the rest of them, which he can optionally do.

“At the weed farm, Merrill orders Penny, Anders, and Jacob to work outside while the rest trim the buds. Daniel asks Penny whether they could switch places, and he accepts, but they are stopped by Merrill, who reminds them that they’re easily replaceable before sending them off.

During the campfire that night, Penny asks for someone to pass the chips, to which Hannah reminds him that he ate the entire bag while high. After Cassidy finishes her rendition of “I'm Willing”, Hannah reminisces about her lost dog, leading to Finn initiating a game of who can share the worst memory. During his turn, Penny tells the others about Jinx, his former travelling partner who had disappeared one night. After Finn shares his dream, Penny resigns for the night and bows before heading back to his tent.

During the party at night, Sean can speak with Penny and Anders, who are drinking by a redwood tree. If Sean didn't refill the coffee in the morning, Penny will tease Sean about being a lightweight; otherwise, he will encourage Sean to drink more and loosen up.

After being interrogated by Maria Elena Flores in the Sacred Hope Hospital, Sean can examine a collection of mugshots including Penny's. Should he choose to examine his, Sean mentally comments that he wouldn't last long in prison. In certain versions of Cassidy's letter to Sean, it is revealed that Penny was released after being interrogated by the police alongside Hannah and Cassidy before being released. With Finn gone, Cassidy writes that Penny and hannah "aren't the same" and the three have begun to fight too often, and that she isn't sure the group will remain together much longer.

"Legal. But controlled. By who? The bitches who made it against the law! Yay freedom."
— Penny to Sean in "Wastelands" (determinant)

"Told you all a thousand times, Big Joe is a clone! They come from a factory in Silicon Valley!"
— Penny to the drifters in Big Joe's truck in "Wastelands"

"I just hope he's okay. Maybe I'll run into his crazy ass someday, who knows... It's a small world. I'll hand him back the trust that he gave me..."
— Penny to the drifters around the campfire about Jinx in "Wastelands"

Penny, Cassidy, Hannah, and Finn in a group photo ("Wastelands"). 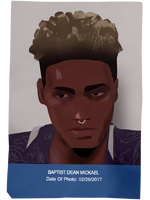 Penny talking with Sean about the impending cannabis legalization.

Penny telling the others his theory on Big Joe's origins in his truck.

Penny listening to Sean and Daniel's story at the campfire.

Penny taking a bow before heading off to bed.

Penny speaking with Sean at his going-away party.