Life is Strange Wiki
Register
Don't have an account?
Sign In
Advertisement
in: Lore, Prescott Family, Lore (Before the Storm), Lore (Season 1)
English

The Prescott Family has been residing in Arcadia Bay for centuries. Being the oldest family in Arcadia Bay, they are very rich and influential, owning most of the town. The Prescotts fund Blackwell heavily, going so far as to donate a new dormitory for the school's use. They presumably live at the Prescott Estate.

The Prescotts may be from Florida instead of Arcadia Bay considering Nathan was born in Florida and Nathan's father and Nathan call Arcadia Bay a "shithole".[1]

See here for all family members and related articles.

In episode two, "Out of Time", the fisherman R.J. MacReady can tell Max that the Prescotts bought up harbor rights. He blames them saying the fish used to jumped onto his boat. He suggest that the Prescotts have that much power that they could rename the town Prescott Bay. He further calls them Crooks that gained respect by putting their name on schools and libraries.

The Homeless Lady can tell Max that there is a lot of beauty in Arcadia Bay but also a lot of darkness, naming the Prescotts, one of them, as greedy bastards that ruined this town, put people out of work and their home like herself.

In "Chaos Theory", Max Caulfield can find out that Officer Berry had a deal with the Prescott family to check up on them, including Nathan Prescott, and make sure they are doing alright.

When Max and Chloe Price break into Principal Wells' Office, they find that Nathan has secret school files that were presumably buried with Prescott money. It states the following in them:

An article in the The Great Northwest about the Prescotts questions their unusual profitable business compared to the rest of Arcadia Bay and housing development Pan Estates, which is to be build deep in the forest, raising Native American groups attention and motions.

An article in the Arcadia Bay Beacon in the alternative timeline mentions the Prescott Foundation having vowed to provide extra research funds to investigate the meteorological anomalies.

Sean Prescott is also the owner and sponsor of the storm bunker under the Prescott barn used in the Dark Room Conspiracy.

Max creates an alternate reality in episode five, "Polarized" by traveling back to Monday's art class, texting David that Jefferson is "sick and dangerous" and submitting her Everyday Heroes contest entry, which causes David to bust Jefferson, and Max to win the contest and fly with Principal Wells to San Francisco's Zeitgeist Gallery. In the airplane she can read another article in The Independent about the police raiding the Dark Room and busting Jefferson, which causes Sean Prescott to be under investigation for owning the barn as well as causing the Prescott family to lose control of their ownership of Arcadia Bay.

In the alternative timeline, Joyce Price works at Pan Estates to finance her daughter's medical treatment.

In Before the Storm, Drew North's father was an employee of the Arcadia Bay Marine Corporation's shipyard before the Prescott Foundation acquired it from bankruptcy and subsequently shut it down. His family is even poorer than Chloes according to her and Blackwell raised the tuition fees. Drew bullies Nathan Prescott because of this.

Sean Prescott anonymously covers the medical expensives of Mikey/Drew North in the hospital.

The Prescott's Barn in "Dark Room" 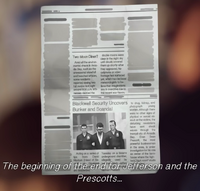