This article lists references to pop culture and different media that can be found in Life is Strange. As the game revolves around Max Caulfield, a teenager at a senior school for arts and science, there are a lot of pop-cultural, artistic and scientific references throughout the game. Many of those references are quite elusive and old-school, and reflect inspirations for the development of the game, or are nods towards other artists.

There are some media that heavily influenced and inspired Life is Strange, as evident by the parallels between the game's plot and setting and those works. Numerous references to these main inspirations can be found throughout the game.

Blue is the Warmest Colour

The Girl With the Dragon Tattoo

During a CNC conference about realism in video games that was held in June 2015, Cano confirmed that Stephen King's work was a source of inspiration in the creation of the game's plot and its universe.[2] Several references to Stephen Kinng's novels can be found in the game.

Postcard from Life is Strange. 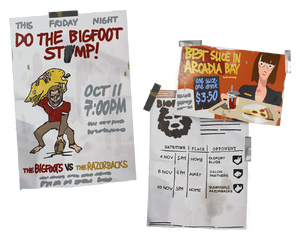 One of the things Life is Strange is full of, is scientific references, focused of course, around scientifically controversial issues about time travel, its paradoxes and "what", "why" and "how" does Max Caulfield a seemingly "normal" teenager, can bend time and space. There are a lot of references to modern science and possible explanations for Max Caulfield's rewinding power.

The Butterfly Effect itself is "branch" of chaos theory, that theorizes about the sensitive dependence on initial conditions in which a small change in one state of a deterministic nonlinear system can result in large differences in a later state. The Butterfly Effect is a recurring theme in Life is Strange. Besides the blue butterfly which symbolizes the butterfly effect amongst other things, this theory is referred several times by several characters including Max, Chloe and Warren.

Chaos Theory is a branch of mathematics focusing on the behavior of dynamical systems that are highly sensitive to initial conditions. "Chaos" is an interdisciplinary theory stating that within the apparent randomness of chaotic complex systems, there are underlying patterns, constant feedback loops, repetition, self-similarity, fractals, self-organization, and reliance on programming at the initial point known as sensitive dependence on initial conditions. Besides the namesake episode there are several characters that refer to the Chaos Theory directly or indirectly.

In contrary to general popular belief, the Grandfather paradox doesn't refer only the old riddle "If I go back in time and kill my grandfather when he was a kid, I can never born, so how did I went back in time and killed my grandfather?". This is just the most intriguing question proposed, the paradox itself revolves around the fact that any action that alters the past, since there is a contradiction whenever the past becomes different from the way it was. Therefore, the Grandfather paradox is present throughout the game.

The Laws of Thermodynamics define physical quantities like temperature, energy, and entropy that characterize thermodynamic systems at thermal equilibrium. The laws describe how these quantities behave under various circumstances, and preclude the possibility of certain phenomena such as perpetual motion. The only reference found in the game is a written statement by Max claiming that they can obviously be broken.

The Multiverse Theory also known as an omniverse or meta-universe, is a hypothetical group of multiple universes. Together, these universes comprise everything that exists: the entirety of space, time, matter, energy, and the physical laws and constants that describe them. The different universes within the multiverse are called "parallel universes", "other universes", or "alternate universes". Obviously this is one of Max's conundrums, as she often wonders about what happens to the original reality she just altered, the more prominent case being the "alternative reality timeline".

Newton's Laws of Motion are three physical laws that, together, laid the foundation for classical mechanics. They describe the relationship between a body and the forces acting upon it, and its motion in response to those forces. More precisely, the first law defines the force qualitatively, the second law offers a quantitative measure of the force, and the third asserts that a single isolated force doesn't exist. Warren makes a direct reference to Newton's third law when in Episode 5, he states "For every action there is a reaction."

Quantum Entanglement is a physical phenomenon that occurs when pairs or groups of particles are generated, interact, or share spatial proximity in ways such that the quantum state of each particle cannot be described independently of the state of the others, even when the particles are separated by a large distance. After pulling an all-nighter to research about her power, thanks to one of the bases of this physical phenomenon, Max arrives to the conclusion "...that time as a FRAGILE FOUNDATION. Nothing is written in stone."

Schrödinger's cat is a thought experiment, sometimes described as a paradox, devised by Austrian physicist Erwin Schrödinger in 1935. It illustrates what he saw as the problem of the Copenhagen interpretation of quantum mechanics applied to everyday objects. The scenario presents a hypothetical cat that may be simultaneously both alive and dead, a state known as a quantum superposition, as a result of being linked to a random subatomic event that may or may not occur. Schrödinger's cat is present throughout the game and in several ways and forms. Max writes about it after pulling an all-nighter to research, Warren makes a joke in a message to Max and you may even consider the Sacrifice Arcadia Bay ending, as a Schrödinger's cat example, everybody is alive and dead until one is asserted.

In the mathematical field of dynamical systems, Strange Attractors are a kind of Attractor. An attractor is called strange if it has a fractal structure. This is often the case when the dynamics on it are chaotic, but strange non chaotic attractors also exist. If a strange attractor is chaotic, exhibiting sensitive dependence on initial conditions, then any two arbitrarily close alternative initial points on the attractor, after any of various numbers of iterations, will lead to points that are arbitrarily far apart (subject to the confines of the attractor), and after any of various other numbers of iterations will lead to points that are arbitrarily close together. Thus, a dynamic system with a chaotic attractor is locally unstable yet globally stable: once some sequences have entered the attractor, nearby points diverge from one another but never depart from the attractor. Chloe calls Max the perfect example of a Strange Attractor.

Tourism in Time or Time Tourists is a term usually used to describe the presence of people or objects with anachronisms in photos or other images, one of the most famous being a woman with a cellphone in a Charlie Chaplin movie. The term rose to fame after Dr. Stephen Hawking referred it in a lecture. Max after pulling an all-nighter to do research on her power arrives to the conclusion, at least one of them, that she may be one of Hawking's fabled Time Tourists.

At a given time Max can use her laptop for research about her power, after opening a page about Wormhole Theory, she will comment on how that theory makes sense. If taken into account how her power works during the rewind Max may actually be right. She may indeed open a wormhole in the fabric of time, (not space), allowing her to go back in time and not to have moved at all in space. This would also explain why pause rewind is harder for Max to perform, in Kate's rescue, under this theory when she pauses time, she actually has to open a wormhole in the fabric space/time as she needs to move herself as well. Further, supporting this theory, is the fact that the rewind position in the timeline is indicated by a "swirl meter" that resembles a crude drawing of a wormhole in the corner of the screen.

The developers conducted research on the setting by travelling to the Pacific Northwest for the purpose of conveying a nostalgic and autumnal feel to the game. The development team visited the region, took photographs, looked at local newspapers and used Google Street View to make sure the environment was accurately portrayed. There are a lot of locations Arcadia Bay is based off.

The name, Arcadia Bay, is heavily speculated to be named after the 90's play Arcadia, by Tom Stoppard. In the play, Stoppard examines the effects of time and how the decisions we make affect the people of the future, which is a common theme found in the game.

The Two Whales Diner likely is based on the Blue Moon Diner, located in Beaverton, Oregon. The interior is incredibly similar, and there is a newspaper article in the airplane in Episode 5 with the headline "Two Moon Diner?" which connects the names of the two diners with each other. Fun fact: The official website of the Blue Moon Diner says "Welcome fellow time travelers" in the upper-left corner and someone posed as Max Caulfield in the comments, stating, "Couldn't decide between the Bacon omelette and the Belgian waffle, they're both hella good." This is a reference to Max's decision in Episode 2. Another comment, made by someone posing as Chloe Price says, "Come here all the time with my bestfriend. Love the bacon omelette its hella amazing." And someone else pretending to be Warren Graham stated, "Love this place! Me and my everyday hero always make sure to hit up this diner for an early dinner before heading off to the drive-in. Those Belgian waffles are hella tasty!"[7]

A signed Ero guro illustration is framed on one of the walls, fitting the atmosphere. 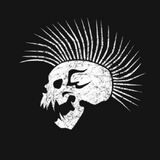 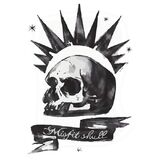 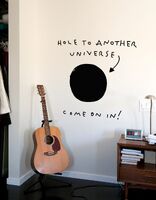 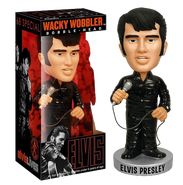 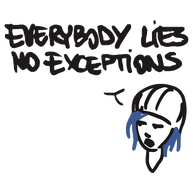 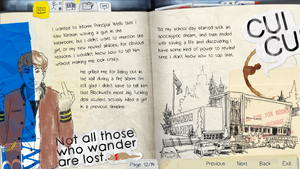 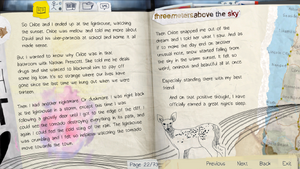 While Max is riding the bus, two boats can be seen on the left side of the main road. One of these boats is named "The Orca", which is likely a reference to the boat of the same name in the movie Jaws (which is theme alluded later in the game).

Jax the Panda (Remember Me) 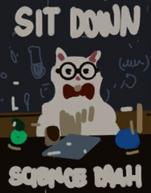 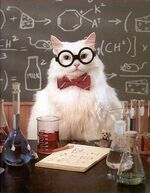 #7 "RLSFTTRCTN" - The Rules of Attraction

When Max goes back in time to the year 2008, there is a picture on the refrigerator of a sailing boat with the word "Garibaldi" beneath it. It appears that this may be based on the title image of the "Visit Garibaldi" tourism website. (It is also present on the refrigerator in the 2013 alternative timeline.) Garibaldi, in turn, is one of the towns that inspired the town of Arcadia Bay.

References to Life is Strange 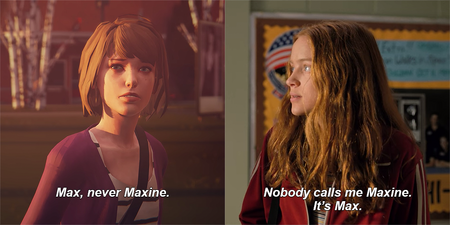 The iconic phrases both girls use when they insist on being called Max.

A comparison between Police Chief Jim Hopper and David Madsen.