Jim Hunt
Reginald McCallister III, commonly referred to as Duckie, is a resident of the town of Haven Springs in Life is Strange: True Colors.

Duckie is an eccentric but kindly senior citizen, prone to formal ways of speaking.

He sports long gray hair and a thick beard, and is seen wearing jeans and a button-down shirt with a bolo tie.

Duckie served in the Korean War, becoming acquainted with a group of fellow soldiers who would go on to establish a tontine, burying a chest of gold in the Nevada desert and meeting yearly to reminisce and take account of who remained among the living.

Duckie is first seen sitting at the same table with Diane in the Black Lantern. After Alex asks for his order, Alex has the option of helping him find his missing whiskey bottle.

He is one of the people at the Black Lantern moaning Gabe's death. At the end of the chapter, he is among the other characters watching a sky lantern dedicated to Gabe.

Duckie takes part in the LARP, playing as a gnome in a tavern (which is really the Black Lantern).

He is one of the people attending the meeting at the Black Lantern voting for Typhon's support before they are interrupted by Alex, who exposes Jed and Diane's scheme. Depending on Alex's past choices, Duckie may or may not support her.

During Gabe's future visions, Duckie will potentially be seen in the Black Lantern.

If Alex chooses to leave Haven Springs, Duckie may watch her board the bus.

Duckie is heard talking to Steph on the radio asking her to predict his future. Depending on the player's choices, one of Steph's dating app conversations will involve someone claiming to have recognized Duckie as the host in a 90s-era infomercial. 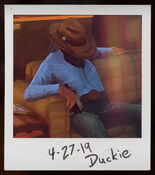