Chapter 1: Side A
Chapter 2: Lanterns
Chapter 3: Monster or Mortal
Chapter 5: Side B
Rocky Mountain Record Traders is the local record store in Haven Springs, Colorado from Life is Strange: True Colors. Steph Gingrich works as the store manger and radio host to station KRCT.

Alex decides to visit the store after her conversation with Ethan Lambert. Upon entering, she looks around the store and sees Steph Gingrich, the store's owner, dancing inside a DJ room. After noticing Alex, she smiles and shows her two records, requesting her to pick one of them. Once Alex picks a song, Steph begins her broadcast. Alex then comes across Ryan Lucan, a park ranger who does part time jobs at the store. After greeting each other and talking about Gabe, Alex helps Ryan search for a missing hold list. Alex also has the option of playing with Steph's drums and looking through some records. She eventually finds it under a black cat named Valkyrie. Because Alex cannot get her to move, Ryan advices her to use Valkyrie's favorite toy to lure her away from the list. They eventually finding it in the junk box. After using it to lure Valkyrie away, Alex is able to recover the hold list and hand it to Ryan. After another conversation about Gabe, Alex purchases a record. Steph then comes out of the DJ room arguing with someone on the phone, to which she is unable to come over because she is busy handling her job. Alex sees red aura around Steph (which is not visible to anyone else) and mimics Steph's foot tapping while clawing the desk. Ryan sees this and goes to calm Steph down, offering to take over for her while she goes to handle her situation. Grateful of this, Steph then leaves. As Ryan goes to ask Alex if she is okay, Gabe shows up. After talking about Ryan and Gabe's friendship, Ryan tells Gabe that Mac wants to have a word with him. Alex and Gabe then leave, with Ryan promising to come see them later after he finishes carrying out Steph's job.

Alex later visits the record store, where she learns that Steph is busy planning the LARP for Ethan and has Alex pick a final boss from two drawings. After selecting one, Steph also suggests that Alex can sign up as a character for the LARP in the form on the front desk, which she can optionally do so.

Later at night in the record store, Steph plays a song in honor of Gabe.

The record store is part of the LARP, where Steph dresses like a witch and has decorated the inside of the record store to make it look like a magic shop. They have the option of buying helpful items. To buy the gem, they will need to get a special type of scale from a serpent (played by Ryan).

The record store serves as the story's main setting. Steph is first seen entering the DJ room in the record store, where she remembers a conversation with the radio store manager recalling her first day working at the record store after quitting her band. After selecting one of the four songs to play, she begins by broadcasting the advertisements found on her desk and also updates her phone's dating app profile after this is done. Whenever she is in the booth, she also has the option to interact with the nearby objects such as the newton balls, the glitter lamp, the dancing flower, the bobblehead, and the sticky dinos (whatever can be found there). In the store, she can find gifts from Charlotte and Eleanor. At the front desk, there is a note with a list of things to do: set up posters, arrange CDs, and check a broken vent (to which Steph will taunt the animal inside it). After she receives a phone call from a male teenager inside the booth, she helps him predict his future. Steph then receives a package from Mikey North containing a notebook, a sketch, a game guide, a D20 die, and a note that says "You Ready?" with a sinister looking face. She then receives another call, but this time from the girlfriend of the earlier caller, who believes she's a psychic. She reluctantly predicts her future using the D20 to hint either a good or not so good future. After completing all the announcements and tasks, she calls Gabe using her cell phone. She expresses how stressful her new job is, but Gabe reveals that she is broadcasting her complaints. Embarrassed, she quickly provides a decent excuse over the radio to avoid humiliation.

At the end of June, after finishing a broadcast, Steph turns on a small fan to cool herself down from the heat. She then gets a call from a father requesting a song for his son. She heads to the backroom to find the requested song, only to find that the cabinet containing the song is locked. There is a clue that provides hints for the combination for the lock. She looks around for the records that match the clues. In the store, she also has the option of changing the tallies on a scoreboard. Once she unlocks the cabinet, she begins playing the song on the radio. Steph also broadcasts some ads while answering two calls from people who also think she's a psychic, to which she uses her D20 to predict their futures. Once all the tasks are done, she proceeds to put away the store's decorations: a sign that says "Pride", some handmade signs, a tray full of badges, a poster, and two flags (the one on the front door must be taken down last). During this, she will remember past conversations with her old friends, including Chloe Price.

During Halloween, Steph remembers another past conversation with Gabe, who is concerned about Steph isolating herself from others. During her next broadcast, she reveals to have a scratch on her hand that she received from Valkyrie while declining a call from Mikey. While announcing some more ads and helping three callers predict their futures using her D20, she access her laptop at the front desk where she will find a list of tasks and an article either about Mark Jefferson or the Arcadia Bay storm. The tasks include tidying up some comics and albums, finding a requested song on her email account, and cleaning up the trash in the back room. While doing these tasks, she remembers painful memories such as police sirens or the storm as well as either remembering the discovery of Rachel's body or her mother presumably being killed in the Arcadia Bay storm. She has the option of listening to a radio in the side room, altering Ethan's drawing, and leaving cat treats for Valkyrie at the window or a corner. After she finishes everything, she calls Gabe and asks him for a drink, but she receives an email from Mikey, asking her to contact him. She heads to the backroom and contacts Mikey via her laptop. While playing a tabletop game with him, Steph remembers conversations involving Chloe, Rachel Amber, Drew North, and Mikey himself and she and Mikey will either talk about Drew's apparent death or Chloe and Rachel's deaths. When Steph complains about the pain that she experienced in the past (which is why she is keeping others away), Mikey explains that he just wants to be a part of her life. Despite this, Steph still cannot get over her pain.

At the end of December, after Steph has finished her broadcast, she gets a call from Gabe, who explains that he is prepared to see a family member that he had not seen in a very long time. After Steph uses her D20 to predict his future, Steph then prepares to handle out some of her remaining tasks, which includes broadcasting ads and answering calls from Duckie and another unknown caller to predict their futures using her D20. She also finds a letter near the front door from Gabe, Ryan, and Charlotte inviting her to take part in a scavenger hunt. After finding seven clues, she finds her prize on a shelf in the backroom: a small dedication plate with her name and a note from the three. After everything is done, she then pops open a champagne bottle that Jed sent her to celebrate the new year.

In a later scene, Steph is shown playing with a wooden sword. She then receives another call from a person asking her to predict her future. Steph points out that she has stopped doing that a long time ago. When the caller asks again, she provides an quick, unspecific answer before hanging up. After talking about Valkyrie, she plays a record and starts dancing to the music. Alex Chen then appears outside the DJ room's window. As Steph picks up two records, she sees Alex, smiles at her, and shows her the records for her to pick, leading to the events of the main story.

Alex Chen in the record store

Alternate view of the record store 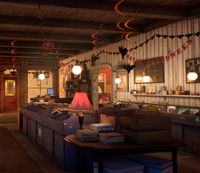