watch 03:19
Wiki Targeted (Games)
Do you like this video?
Play Sound

Sean's Sketchbook records Sean Diaz's experiences throughout the events of Life is Strange 2. Sean draws sketches and makes comments based on recent events and his surroundings, some of which change depending on choices. At certain points in the game, Sean can optionally sit and draw sketches of his surroundings, which he adds to his sketchbook upon completion. Sean's sketchbook is primarily filled with sketches instead of text, as opposed to the journal/letters in Life is Strange and Before the Storm.

The illustrations and scribbled text in Sean's journal are drawn by artist Alyzian.[1]

Sean keeps a list of bookmarked pages that can be accessed from the left-hand sliding menu. This list consists of pages that depict or concern key characters he has met along his journey, as well as his optional drawings.

A ticket stub Sean keeps from a concert he and Lyla go to for her birthday. 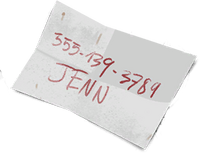 Retrieved from "https://life-is-strange.fandom.com/wiki/Sean%27s_Sketchbook?oldid=121145"
Community content is available under CC-BY-SA unless otherwise noted.