"Stella is always deep in her notes. She didn't come to Blackwell to mess around." — Max observing Stella in "Chrysalis"

Killed by the storm (presumed, determinant)

Ashly Burch (ENG) (uncredited)
Airi Ōtsu (JAP)
Stella Hill is a student at Blackwell Academy. She lives in the Prescott Dormitory, and seems friendly towards Max despite being focused on school work. She attends the same photography class as Max, taught by Mr. Jefferson.

Stella is very studious, serious, and dedicated. She seems to be outgoing and interacts with other students despite having a focused approach to her education. It's implied that she grew up in poverty with an abusive family.[1]

She has a pronounced admiration for Mark Jefferson and his New York urban photography, and much like his other students, is glad that he came back to Arcadia Bay to teach at Blackwell.

Frank's logbook shows that she purchased ADHD medication from him at least once. It's not clear whether she actually has the disorder or is simply using it recreationally. ADHD medication is known to be used by college students as stimulants to help study and improve concentration. Stella, a girl under pressure to escape an impoverished life, might resort to this.

Stella is first seen in Mr. Jefferson’s class, sharing a table with Hayden Jones. She twirls her pencil while listening to Mr. Jefferson’s lecture, eventually dropping it. Max Caulfield doesn't comment on this, but does seem to notice it happen both times she lives through the moment. As the class ends, Mr. Jefferson chides her slightly for not handing in her entry for the Everyday Heroes Contest. After the class, Max passes Stella in the hallway, while she is sitting on the floor, looking at a drawing, which Max refers to as her notes. When Max is going to save Chloe Price, she doesn't think Stella can help.

After Max pulls the fire alarm, Stella is on the main campus talking to another student, beside one of Mr. Jefferson’s photos. She talks to Max about how she admires Mr. Jefferson, and how she’s glad he’s returned to Oregon from New York. She also mentions that if she had the chance, she would make a move on Mr. Jefferson similar to Victoria's efforts. She also heard from a “good source” that Rachel Amber had sex with him.[2]

When Max asks Stella about Rachel, she tells Max that Rachel hung out with people like Victoria Chase, and she didn't really know her that well. She then wants to be left to study the photo.

On Tuesday morning, if Max knocks on Stella’s door, she yells at Max to "go away", because there are people sleeping, which causes Max to comment that she's not a morning person. After Max visits Dana Ward in her room, Stella will yell at Dana through the wall to turn her music down.

Later when Max is in Kate Marsh's room, she sees a picture of Kate, Stella and Alyssa Anderson hanging out together, which surprises Max. She comments that she didn't know that the three had ever hung out together; however this would make sense considering the three girls are outside the popularity of the Vortex Club crowd.

When the entire school is standing outside the girls dormitory at Kate’s suicide attempt, Stella is standing next to Courtney Wagner, looking very scared.

When Max and Chloe decode Frank Bowers's log book, Stella's name appears several times. It is obvious that she is medicating with recreational drugs in order to help with her focus during studying. It could also be a way of coping with her family issues.

Stella is working at the entrance of the End of the World Party. Max is surprised to see her there, but asks about Nathan Prescott. Stella says that he creeps her out and that he isn't at the party yet.

She reckons that Principal Wells should have cancelled the party after the incidents earlier in the week, but is glad to have the job. She remarks that Jefferson got her the job, aware of her lack of funds, and that she is treating the party like homework for the night. It is possible her lack of funds is due to her use of recreational drugs.

She promises Max that she will text her if she sees anything regarding Nathan at the party.

Near the end of the episode, she can be seen sitting in the back booth of the Two Whales Diner with Kate and Daniel DaCosta in Max's nightmare. One of the things she says to Max is, "I survived poverty and an abusive family just so I can end up here to die."

If Max chooses to sacrifice Arcadia Bay, Stella is presumed to be among the town's casualties.

In the alternative timeline, she is dating Warren Graham. We have no knowledge of how they ended up together, although it makes some sense considering their shared interest in academics. 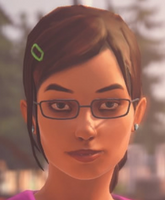 Stella in Episode One: Chrysalis

Stella and Courtney watching Kate ("Out of Time")

Stella and Warren in the alternative timeline ("Chaos Theory") 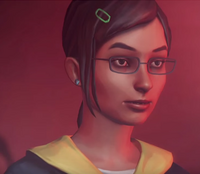 Stella in Episode Four: Dark Room (Note what seems to be a bruise on her cheek)