Life is Strange Wiki
Register
Don't have an account?
Sign In
Advertisement
in: Article stubs, Characters, Characters (Before the Storm),
and 11 more
English

"I don't normally get involved in other people's dumb decisions." — Steph Gingrich in "Brave New World"

Steph is written as an openly queer character. Her behavior towards Rachel and a drawing that says she has kissed girls on Chloe's letters suggest that she is gay.

Steph is seen as being somewhat on the "geeky" side with an appreciation for theatrics and movies. She enjoys tabletop games, which she plays with her friend Mikey North. She is also a talented artist.

In her first appearance in Episode 1: Awake, Steph is seen wearing a casual red Arcadia Bay t-shirt with white stripes on the sleeves, a white beanie with a yellow and orange flame sewn onto it, a necklace with the symbol of a dragon on it, blue jeans and teal sneakers.

In Episode 2: Brave New World, she is wearing a green t-shirt with white stripes on the sleeves and on the neckline, her white beanie and her dragon necklace, a bracelet on her right forearm, jeans and grey sneakers.

The following is what Chloe Price wrote about Steph in her journal:

I can never decide if Steph is the coolest or nerdiest person in all of Blackwell. Maybe both? She's definitely queen of the indoor kids, with all their weird roleplaying games and sci-fi shit.

I guess her dad is a video editor. She makes some sweet cash by selling bootleg DVDs. Don't knock the hustle. And I'm pretty sure Steph does all the backstage technical work for the school plays, which checks out. Another thing about Steph: she's into girls, and she doesn't give a shit what anyone else thinks about it.

Steph is seen sitting with Mikey North on the benches of the Blackwell Academy campus. Chloe Price asks her for a copy of the Blade Runner: Director's Cut DVD, which Steph gives her free of charge because she is "glad someone appreciates the classics". She then asks Chloe whether she knows if Rachel Amber is a gamer, and if Chloe and Rachel are together or their outing was just "a friend thing", and Mikey teases her about her crush. She asks Chloe to join her and Mikey in playing a tabletop game resembling Dungeons and Dragons.

According to Chloe's journal, Steph is a lesbian, as she has a picture of her next to an arrow that says "has kissed girls". Chloe also writes, "Another thing about Steph; she's into girls and she doesn't give a shit what anyone else thinks about it".

Steph can be seen sitting on a bench in front of the boys' dormitories, and Chloe can optionally speak with her. The conversation focuses on The Tempest, of which Steph is the stage manager. She then tells Chloe that she's thinking about making a move on Rachel, but not if Chloe is attracted to her. Chloe can tell Steph that Rachel is single or that she is unsure about her feelings towards Rachel. If Chloe chooses the latter, Steph will say she understands and that Chloe can talk to her anytime. If Chloe chooses to say Rachel is single, Steph will be surprised.

Steph can be seen in the hospital with either Mikey or Drew.

If Mikey gets his arm broken another session of the tabletop game can be played, the events from the first session in episode one have some effects on the session in the hospital.

According to the teasing, Mikey, Drew and Chloe will start when Steph struggles to state what she'd do to Damon. She also seems to be interested in: Karaoke, indie music or more unknown bands (to quote Drew: "Tell him about a band he's probably never heard of, but should have")

Also, her stage manager voice seems to be pretty scary according to Drew.

"Steph: Here's a character sheet. You are an elf barbarian.
Chloe: Are you insulting me in some obscure nerd way?
Mikey: Think about it. An elf? Like, skinny and kind of weird? But also a barbarian, so, like, really angry.
Steph: In other words, Chloe Price."
— Conversation between Steph, Chloe, and Mikey in "Awake" (determinant)

"Steph: Love the hair, by the way.
Mikey: Pretty cool!
Chloe: Thanks. Just trying it out.
Steph: Sometimes you've just gotta do something new."
— Conversation between Steph, Chloe, and Mikey in "Hell Is Empty" (determinant)

"Where do you keep getting these?" - "A good game master's always prepared."
— Conversation between Chloe and Steph in "Hell Is Empty"

"Chloe: I grab the bard and use him to shield Elamon.
Drew: Whoa, hey! Can she do that?
Steph: All's fair in love and tabletop."
— Conversation between Chloe, Drew, and Steph during the tabletop game in "Hell Is Empty"

"Thanks for playing. It always means a lot to Mikey."
— Steph to Chloe in "Hell Is Empty" 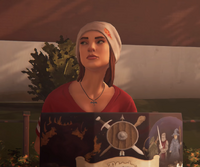 Playing Dungeons and Dragons with Mikey in Episode 1, Awake. 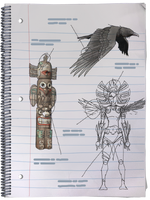 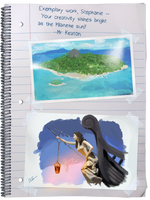 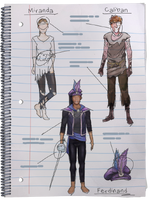 Steph's sketches about "The Tempest" costumes. 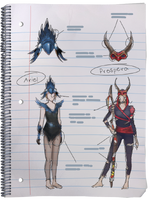 Steph's sketches about "The Tempest" costumes.

Steph's sketches about "The Tempest". 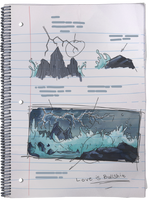 Steph's sketches about "The Tempest" (alternative).