Stephen's Computer is located inside Stephen Reynolds' study at the Reynolds Household. It can be used by Sean Diaz in Episode 2 of Life is Strange 2.

After retrieving the keys to the shed from Stephen in his study, Sean can attempt to use his computer, causing Stephen to tell him that it's better if he takes some time away from the internet for the time being.

The next day, Sean wakes up to find that the Reynolds have left for church until noon. While Stephen is gone, Sean can choose to use the laptop to search up Brody Holloway's blog, check his and Lyla Park's Facebook pages, and browse Stephen's open tabs. 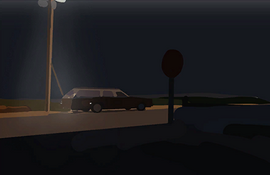 This dispatch from off the road is a tribute to a couple of new young friends I made on a recent adventure that I’ve yet to transcribe... or even fully process yet. I’ll leave the details vague to protect the innocent because believe me, they are not guilty. But let me digress.

The best part about being a professional traveler (meaning I sometimes make gas money off these dispatches) is the people you meet on the proverbial road. Of course, the worst part about being a professional traveler is the people you meet on the actual road. I’ve been too lucky for a variety of reasons, though I’ve had moments of pant-shitting fear, from the highway patrol hiding following me at night to that weird motherfucker I picked up in Iowa who wouldn’t leave the car (read that awful account HERE). Ultimately, I approach strangers as potential friends, if not allies. I’m that naive and stupid that the universe feels sorry for me and lets me skate by as I help people on instinct rather than objectivity. First Thought, Best Thought. I still hear my ex-brother (his choice) telling me years ago that, “You read all this Kerouac crap about life on the road but you can’t even change a tire, asshole.”

He was right. So I learned how to change a tire. I’m not good at it, so I also have towing insurance. End of dilemma.

However, I can’t always give my own version of roadside assistance, including to my young compañeros who needed it the most. I wish I would have done more for them, maybe even joined their quest. Because it’s a more important journey than mine. Instead of just pushing a rock up a hill, I could have helped them move mountains out of the way. If we were hanging out again, I would ask you to forgive me for not coming along to offer whatever help I could. Then again, I’m kind of a clumsy dork and I could have fucked shit up by trying to play savior. Ah, the paralysis of analysis.

My suspicion is that they really didn’t need me in the end -- just each other.

So I’ll continue to weave this highway and roadside tapestry, always paying it forward. Call it guilt if you want, I’m still that geeky, sincere kid who looked up to anybody who wanted to change the world for good, who wanted to move mountains for others. I always wanted to be a carbound Lois Lane, a roaming reporter getting in the face of this corrupt matrix. Sure, my adult cynic knows the system is rigged, that we’re screwed and that justice is often just a joke.

But when I saw the faces of my wandering friends who went through Hell (and are still there for all I know) smiling with child-like gratitude at my most trivial of gifts, I felt ashamed, saddened. There are times when I encounter a little soul lost and they flash that wide-eyed, grateful, frightened stare and you feel your heart break into a million pieces. Now I think of all those children out there alone in the night, on the precipice, the razor’s edge of America and beyond, wanting only the most basic of life’s needs like food and parents. It makes me cry and sick at once. Then I rage, rage at the dying light and vow to do my part. 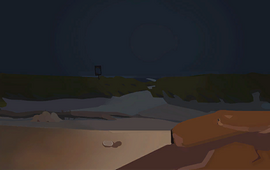 That’s the benefit of an activist on wheels. I always like to think of myself as moving forward, like a friendly shark, otherwise we don’t eat, we don’t survive. Now I find myself thinking of the past, wondering if I gave the best advice to those in need; if I even helped those lost children of the American night by leaving them on their own. Then I realize that I’m the one who’s actually lost out here - my friends climbing the hills know exactly where they’re going.

And I know you’re going to make it home.

The sky is almost a perfect blue cliché as I pull my weary gas beast off the winding Highway 5 into the tiny main vein of Rockville Springs, Wyoming, and at its community height, Pop. 472. This is a stark barren land before time, like any other sleepy town born from the local mine shafts that fed the community — along with the robber barons who owned the oil. The citizens suffered their fair share of tragedy over the decades but managed to retain a healthy main street with a few thriving shops and services. But by the end of the oil-starved 1970s, the once-sleepy town was in a coma after the last drops of the precious earth blood had been mined. The company quietly closed shop and left the town and populace to their own devices. Which meant most people packed up, closed shop and left forever.

Which brings me today to Rockville Springs, Wyoming, Pop. 51. Yet the ghosts who stayed behind to haunt what was left of the town are now... stark naked.

There was always an eccentric, Lynchian aura over Rockville Springs as demonstrated by their very own nudist community, who'd been quietly amassing ever since the 1950's after the local oil first gushed from the earth. The town wasn't as religious or conservative as others in the repressive era so the though of nude volleyball didn't cause a legal scandal. How could it when the city's own Mayor was seen — or unseen — sunbathing in his birthday suit? So therefore nobody gave a rat's ass even though they could see everybody's ass. When the majority of the town was abandoned, the nudist community saw this as their chance to purse the end goal of their lifelong dream: a naked public sphere free of moral judgement.

But back in the future, i.e. 2016, the leftover, forgotten and unclothed residents of Rockville Springs have come under some misguided public and political attacks for their au natural lifestyle. Thanks to smug media reports, curious visitors now drive through the depleted main street not to get a cup of the damn fine pie and coffee at Raw Cafe (tell 'em Brody sent you) but to giggle and take selfies with the nude townspeople as their background props. It's rather gross to witness as I did in my brief drive-through report. Yet there is no doubt some members of the town welcome the tourists because they spend money. There's that old expression, There's No Such Thing As Bad Publicity. Ironically, I'd heard about Rockville Springs in my travels and vowed to stop there someday, if only to satisfy my need to see a 56 year-old naked man change the oil in my car.

Then I had a boring epiphany: How do you talk to a naked person?

I found out you just... talk. You don't forget that they're not wearing clothes, but you actually end up being embarrassed that you are. The people I saw and chatted up didn't even have any particularly unique insights into the world or geo-politics (as the mechanic told me, I give 'em taxes. Don't ask me to vote for the bastards too."). Ironically, some tended to be quite conservative, they just wanted to not pay taxes without clothes. Others seemed to stay out of sight with the crowds around. Which makes the recent media circus more insulting, since the tone of the reports is always a condescending, "OOO, lookit the funny people with sagging flesh cooking eggs and jogging down the road!" And full disclosure: I admit that the former Brody would have been one of those same judgemental assholes. Glad I'm not him anymore.

Okay, take a breath my dude, I'm not saying this mild condemnation is a great threat to liberty. We obviously have worse going on in this big country, but it's always a revealing microcosm of how we treat each other in all our naked hypocrisy. ⬤

Lyla's profile (if Sean did call her).