"This is your home now. Keep your heads low around here. Beaver Creek is small and... nosy." — Stephen to Sean in "Rules" (determinant)

Stephen Reynolds is the next-door neighbor of Chris Eriksen and Charles Eriksen in The Awesome Adventures of Captain Spirit and Life is Strange 2. In "Rules," he is revealed to be the husband of Claire Reynolds, the maternal grandfather of Sean Diaz and Daniel Diaz, and the father of Karen Reynolds.

Stephen is an elderly man with blue eyes and balding grey hair. He wears black thin-rimmed glasses, as well as a golden wedding ring on his left hand.

On the night Sean and Daniel arrive at their house in "Rules," Stephen wears a grey polo shirt, blue trousers with red suspenders, and dark grey slippers, as well as a gold watch on his left hand. A week later, Stephen wears olive trousers, a blue-and-red flannel shirt with a white pen tucked into its left pocket, and the same suspenders and shoes. The day after, Stephen adds a heavy grey jacket and brown shoes to his outfit from the previous day.

In the Parting Ways ending from "Wolves ", Stephen wears a blue buttoned-up shirt, khaki pants, and the same suspenders and shoes.

Though Stephen regularly attends church with Claire, his religious views are not strong like hers; he accepts Daniel having powers while noting that Claire may not due to her beliefs. He also uses religious epithets including "hell" and "goddamn."

Stephen appears to be really bad at fixing and prioritizing things. Evidence of this is a handle that falls off a kitchen cupboard which leads to his wife commenting that he can fix his trains but can't fix the cupboard. A ship-in-a-bottle ornament in the lounge area is also broken, and this gets another comment from Claire that he doesn't know how to fix it. The leg of a cupboard in his study is also broken, which nearly causes the cupboard to fall on his grandson, Sean, when he tries to open one of its doors. There is also a power cable issue with his radio which he has been aware of. Considering that Stephen helped his neighbor, Charles, build the tree house for Charles' son, Chris, and with Stephen's track record for not doing a great job of upkeep and repair, this may have led to one of the wooden ladder bars being easily broken on the tree house (which we see happen at the end of Captain Spirit and during Episode 2).

Over forty years ago, Stephen met and fell in love with a woman named Claire after dancing the hustle with her at a disco night. After marrying Claire, the couple purchased a house in Beaver Creek, and Claire gave birth to their first and only daughter whom they decided to name Karen. In Karen's adulthood, following the birth of her second son, Karen came to mutually decide with her husband that she would leave him to take time to discover herself, which Claire and Stephen heavily disapproved of due to their beliefs surrounding marriage. Karen would go on to only have contact with her parents once via phone call and six times via letter over the next decade; at one point, she asked her parents for support in paying her debts in New York, but refused their offer to do so on the condition that she would return home.

Stephen served as Beaver Creek's fire chief for 40 years before retiring years prior to Sean and Daniel's arrival at their home, and he remains well-known and well-respected around the town due to this status. A plaque commemorating his long service is displayed proudly on the wall of his study, and a Beaver Creek Fire Department T-shirt Sean wears during his stay at the Reynolds' house is highly likely to have been part of Stephen's wardrobe.

Some time ago, he decided to build a working scale model depicting a section of Beaver Creek's railway, which can be found on the upper floor of his and Claire's house. Prior to the events of Captain Spirit, Stephen helped his neighbor build a tree house in the Eriksens' backyard, after which Chris Eriksen thanked Stephen by drawing a picture of him holding a fire sword.

If Chris decides to use the landline to call the Reynolds' house before Charles falls asleep, he asks Claire about getting Stephen to help build some additions to his backyard's tree house and recalls when he helped Chris' father construct it, to which Claire replies that he'd love to.

During Chris and Claire's conversation at the Eriksens' front door, Claire can mention wanting to buy a Christmas tree with Stephen, and the two can talk about his love for building and getting him to help fix up the tree house. Should Chris give Claire reason to be concerned about his father's treatment of him, she tells Chris that she'll return with Stephen to have a talk with Charles.

Stephen opens up his house as a home to Sean and Daniel after they arrive at his door and assure him that they did not kill the police officer in Seattle. He warns them that Beaver Creek is small and nosy, and he and Claire impose rules on the brothers to prevent them from being discovered: Never go outdoors, and do not use the phone or computer, which can both be traced. Stephen enjoys spending time with his grandchildren while they are in his home. He has a model train station in his home that he's been working on for a decade that he and Daniel play with.

A week after the boys' arrival, Stephen calls Sean into his office and asks if he noticed anything strange about Daniel. Sean can say yes or no, but either outcome will result in Stephen revealing that he knows about Daniel's telekinesis and to keep it a secret from Claire, as she would not understand with her strong religious views. While in Stephen's office, Sean can also find a picture of Karen, and the following conversation indicates that he understands why she left, even if Sean doesn't. He also tells Sean to be careful, because Daniel is still so young and needs him more than anything else.

The next day, Sean wakes up to find that Stephen and Claire have left the house to attend church until noon. Later on, Stephen and Claire return home to discover that the brothers have broken into Karen's room and found her letter regarding Seattle. Though Stephen supports their longing for more information about their mother, he is overcome with emotion and leaves the room during the ensuing argument. Moments later, a loud crash and Stephen's yell are heard from downstairs, and Sean, Daniel, and Claire rush to Stephen's study to find him pinned underneath his long-neglected cupboard.

Sean and Daniel lift the cupboard together and pull Stephen out, injuring his leg in the process.

Daniel lifts the cupboard with his power, revealing it to Claire, and Sean pulls Stephen out from under it without injuring him. Stephen reassures Claire after she becomes frightened of his powers, and she then declares Daniel's power as a miracle from God.

The police discover that Sean and Daniel are at the Reynolds' residence and show up at their door right after the dresser incident. Stephen tells the boys to hide in the garage, but Sean insists that he doesn't want them to go to jail for harboring them, and they instead grab their bags and leave. Claire answers the door to distract the police, and Stephen gives one final goodbye to the brothers from the floor.

In the Redemption and Parting Ways endings, Stephen and Claire are shown to have been given full custody of Daniel. During the Parting Ways ending 6 years after helping Sean break through the border, a house arrested Daniel, while speaking to his mother, watches Stephen mow the lawn.

"What the hell are you doing here?"
— Stephen upon seeing his grandsons for the first time in years at his doorstep in "Rules"

"That's why you'll have to be careful around here... Beaver Creek is small and... nosey."
— Stephen cautioning Sean at the dinner table with Claire in "Rules" (determinant)

"So, listen, I've... noticed things. With Daniel. You know what I'm talking about, don't you?"
— Stephen to Sean while in Stephen's office in "Rules"

"...she's still my daughter, you know? I can't approve what she's done, but I... I think I understand."
— Stephen after Sean discovers a hidden photo of Karen in his office in "Rules" (determinant)

"You were right, Claire. I should have fixed that cupboard months ago. I guess my laziness will get me someday..."
— Stephen after being pulled out from under the fallen cupboard in "Rules"

"Now... Get the hell out of here!"
— Stephen to Sean and Daniel as they leave the Reynolds' house in "Rules" 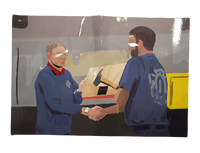 Stephen accepting an award from Beaver Creek's mayor for his work as the town's fire chief.

A photo of a young Stephen standing with his wife and daughter.

An old photo of Stephen and Claire's wedding located in their bedroom.