The Road to Life is Strange 2

"In preparation for release, we wanted to give you one last sneak peek at Episode 1, and tell you a bit more about the thinking behind the direction of Life is Strange 2. ‘The Road to Life is Strange 2’ is a short documentary about the making of Life is Strange 2, featuring an exclusive look behind the scenes and comments from Co-Creators Michel Koch, Raoul Barbet, and Jean-Luc Cano, as well as other key figures in the development team." 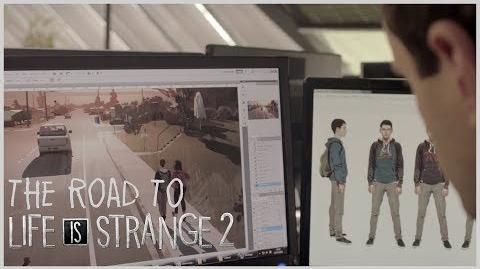 Michel Koch: So right after the end of Season One we've been working hard on working on Life is Strange 2 and on thinking and working together with Raoul, with Jean-Luc, with all the team to think of what do we want to do next after the first game.

Jean-Luc Cano: It was a lot of discussion about what we want to do, stories we want to tell and what kind of game Life is Strange could be.

Luc Baghadoust: Quite early we admitted that we wanted to do something different, go with new story, new characters.

Michel Koch: In the first game we told the story of Max and Chloe of course, but it was a whole story, it was a finished story for us.

Jean-Luc Cano: We asked ourselves one question, "If Life is Strange is becoming a series, what is its real DNA?", and the answer is - Life is Strange series is about everyday relatable characters, facing universal issues laced with a twist of the strange. When we figured this, we were also able to imagine the story of Life is Strange 2.

Luc Baghadoust: So Jean-Luc, Raoul and Michel had a lot of ideas, it was really exciting to see what new story will be told in this new game.

Sean and Daniel are shown walking down the street. A few moments later, Sean enters the Diaz household.

Raoul Barbet: We decided for this second season of Life is Strange to follow Sean & Daniel, two brothers.

Michel Koch: They are living in Seattle and after some terrible incident, they are forced to flee their home.

Several shots of the incident are shown. Sean lifts an unconscious Daniel from the ground and runs away.

Michel Koch: They will be on the road by themselves and they will be trying to reach Mexico. And on top of that, there is some mystery, some supernatural elements that will happen during their journey and the player will have to face.

Michel Koch: An important part of Season Two is this travel aspect. They are fleeing, they are on a journey and they need to advance and to move, they cannot stay in one place.

Raoul Barbet: This is something we also wanted to talk about, the fact that you are on your own in the wild and you don't have any money anymore.

Michel Koch: You become to be an outcast, you become to be somehow homeless, and how people will look at Sean and Daniel will be really different to how they used to when they were in Seattle.

Christian Divine: And what happens when they have to go on the road and experience these adventures and force them to confront the world that they were sheltered by a bit. And Sean as the big brother has to be the mentor, teacher, father-figure on their road adventure.

Sean and Daniel are walking down a road. A few moments later they are shown sitting on a cliff.

Jean-Luc Cano: As Sean, you are in charge now, you have to take care of your little brother Daniel.

Jean-Luc Cano: The choices you will make of course but also the way you behave, the dialogues you will choose, every decision will have an impact on Daniel's behaviour.

Sean and Daniel are at the beach, throwing pebbles into the water.

Sean: Spin your wrist when you throw.

Sean: That was awesome.

Christian Divine: It's about them becoming the people they are supposed to be and of course it's about the player's choices in making those characters who they are and the player having that decision-making power over the characters and then hopefully becoming part of them, with them, empathetically on their journey.

Sean and Daniel are sitting next to a campfire.

Daniel: Sean? Are we okay?

Michel Koch: There is also the overall aspects of the game, the visual, the music, the presentation, where we are keeping what we loved from the first game and making that evolve with working on better visuals and evolving the technology but still keeping every aspect of the artistic direction, for example, of the first game.

Teppei Takehana: And now we have more experience, so we can focus on more interesting scenes. The first thing of course is to increase the animation quality in the entire game, so it's coming from the body animation with more detail and also we have a higher quality for the facial animation.

Sean and Daniel are shown walking down a road.

Daniel: But my feet really hurt, these shoes suck and we've been walking for four days.

Sean: This is a real adventure, right? (dragging Daniel) So c'mon, let's hit the trail. Seriously..

Daniel sits down on the ground.

Raoul Barbet: So the body actors are French actors, they are living here in Paris, so we do motion capture with them and they add a lot to the body language and of course the rhythm of the scene, everything that we shoot with them in motion capture.

Roman George (as Daniel):Okay, okay I'll do it.

Gonzalo Martin: I didn't know Roman before Life is Strange. We met here in the studio, little kid came in, entered the room when I was recording, and they say "we're going to do a duo mic now, so he's your little brother". Really cool kid, had a lot of fun working with him, and he really has Daniel inside of him.

Roman George (as Daniel):What do I say?

Gonzalo Martin (as Sean):Just be yourself, I mean don't tell them that we're campers though.

Roman George: Me and Gonzalo worked in scenes together as in both of us help each other get our emotions out. I really enjoy working on Life is Strange 2, it's fun, amazing. It's really cool for voice over, personally it's one of my favourite things I've ever done in my acting career.

Roman George (as Daniel): Ooh, this is way better than the one back in the woods!

Sean and Daniel are sitting at a table outdoors.

Brody: Where are you guys off to now?

Brody: Right on, see you later.

Raoul Barbet: For the first Life is Strange, music was really important. It was a mix between Jonathan Morali music for the score and licensed tracks. We wanted to continue this way but with small changes also.

Sebastien Gallard: We wanted something a little different from the original one, something more electronic with a bit more processed sound and more rhythm in the music. The music is evolving all along the game, which was something we didn't do on Life is Strange 1. It brings something to the player and also to the characters of the game.

Michel Koch: We can't wait for the player to experience Sean and Daniel's journey, and we hope they will enjoy Life is Strange 2.

Sean and Daniel are standing on the side of the road.

Sean: Tag your ass and run, you're it!

Daniel: No way! Not fair!

Daniel: Okay, I'm a zombie and I'm going to eat you.

End of the video.