"Man, that smell of breakfast and the sound of clanging silverware... Makes me feel thirteen again..." — Max Caulfield's monologue inside the diner in "Out of Time"

Episode 1: Chrysalis (cutscene)
Episode 2: Out of Time
Episode 3: Chaos Theory
Episode 5: Polarized
The Two Whales Diner is a local diner in Arcadia Bay known for their "home style cooking" and "old-fashioned service". Chloe Price's mother, Joyce Price, works there as a waitress. According to Max Caulfield, it serves "the best damn hamburgers in Arcadia".

It is clear that the diner is hugely popular, particularly with the students in the area. Police officers, passing truck drivers and other residents of Arcadia Bay also frequent the diner, possibly due to its proximity to a bus stop, a large parking space next to and opposite the diner and a gas station nearby. The diner also advertises that it is open 24 hours. This further increases the scope of its business.

The diner makes its first brief appearance in Episode 1, where we see Joyce cleaning the counter tops, looking out at the snow-storm at the end of the episode. There are also fliers for the diner on the Blackwell campus and in the Madsen household.

Max meets Chloe here for breakfast during the episode, and has a reunion with Joyce while she waits for Chloe to arrive. Max can explore the diner and talk to several guests before sitting down. The bathroom has a large amount of graffiti - most notably, the doe on the wall similar to that of Max's shirt; her spirit animal. Other notes include "Kate Marsh love u long time", relating to Kate's viral video, as well as creating a possible reference to The 40 Year Old Virgin or Full Metal Jacket.

The booth Max decides to sit in has notable etchings on the table, which she attributes to Warren Graham and his nerdy habits.

The Diner is featured again in this episode. Max tries to find a way to steal Frank Bowers's keys, who is eating inside. Several other characters can be encountered, including Officer Berry and Nathan Prescott who, among other things, tells Max how to approach Frank for drugs.

After Max makes her way through parts of the storm to head to the diner, she is surprised as it blows up due to a spreading fire and Max must rewind and put the fire out by using the sand to her right. Max has to use the side entrance to enter because Frank's RV is crashed into it. When she does enter, she is greeted by Joyce and Warren and sees that Frank, Pompidou, (if they're still alive) and a stranger are held up there as well.

The diner is later featured again in Max's nightmare.

In the Sacrifice Arcadia Bay ending, the diner is shown to be severely damaged, but still standing. It is unknown if the people taking shelter inside the building are alive or not.

The items on the menu that are viewable to Max appear to be breakfast food items only. They are as follows:

The following items are not listed on the menu.

The diner has many items that Max has the option to observe.

The "Fishing Wall Of Fame" is located in the corner of the diner closest to the jukebox. Awards are given each month to fishermen that catch fish which are significant, but how they are significant is unspecified. The awards are given by the Arcadia Bay Fishing Club according to the banner underneath the display.

In the bathroom, there are many instances of graffiti, some of which are also observable.

After ordering her breakfast:

Inside a ruined building:

After putting out the fire:

During Episode 2, Max can shoot three optional photos in and around the diner, including the Two Whales sign and Frank's dog through a fence behind the diner. She can shoot an optional photo in the bathroom. "FIRE WALK WITH ME" is scrawled across the mirror in large letters.

In Episode 3, Max can take another photo of a dead bird surrounded by insects in a circle, just around the side of the diner.

There is another photo across the road of a truck, which you can obtain by speaking to the truck driver and rewinding to comment on his Needham and mention Rachel Amber.

In the final episode, there are two opportunities to take an optional photo near the diner: one is of a car blown on top of a building, and another is of a whale on the road.

Max walking towards the diner. 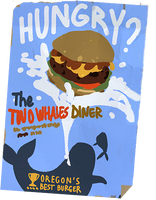 Flyer on a Blackwell Academy noticeboard.

Portion of a flyer from Max's diary. 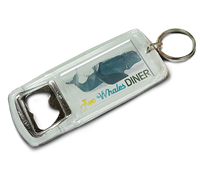