Chapter 1: Side A
Chapter 2: Lanterns
Chapter 3: Monster or Mortal
Chapter 4: Flicker
Chapter 5: Side B
Typhon Mining, commonly referred to simply as Typhon, is the antagonistic company in Life is Strange: True Colors. Local residents of Haven Springs, Jed Lucan and Diane Jacobs are closely associated with it. Typhon has a main office in Denver, Colorado.

Typhon is in charge of the blast charge scheduled for 9:00 PM. While searching for missing Haven Springs resident Ethan Lambert up at the mines, Gabe Chen mentions that Jed Lucan worked for Typhon twelve years prior. With himself, Ethan, Ryan Lucan and Alex Chen all in the area, Gabe calls the Typhon blast crew that there's people still on the mountain. Local resident and Typhon Safety Manager Mac Loudon is on duty and receives Gabe's call, relaying the warning to call off the blast for the time being. However, Mac's protests go ignored, and the blast goes off anyway at its schedule time, resulting in Gabe's death. This causes Mac's superiors at Typhon to pressure him into lying about not receiving Gabe's call.

Typhon has Diane send Charlotte an affidavit offering money in exchange for her silence, which Charlotte believes can help Ethan. While accessing Mac's fear, Alex sees an imaginary security camera, and becomes aware that Typhon is watching Mac. After she learns of Typhon's sinister motives, Alex vows to put a stop to its operations in Haven Springs with Ryan's help.

While looking through the information in Diane's stolen USB drive, Alex learns that Diane was pressured by her superior Leena Clark to cover up the truth about Gabe's death. This led Diane to pressure Mac into lying in turn. Ultimately, Alex learns of an operation codenamed Rhea, which rigged the explosion to cover up a second unscheduled and illegal explosion, in order to hide the truth of a past incident which occurred at the mine.

After learning that Alex is responsible for stealing Diane's USB drive, Typhon pressures Deputy Sheriff Jason Pike to threaten her with an affidavit, along with photographs of Ryan Lucan and Steph Gingrich. When this does not work, Typhon had no choice but to order Jed to get rid of her in order to prevent Alex from uncovering the truth and disrupting Typhon's operations. 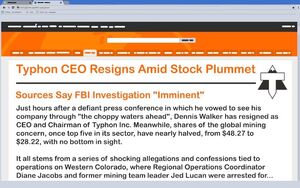 Jed's attempt to kill Alex is ultimately in vain, as Alex survives the gunshot (which really missed her) and her fall into the mine. After Alex reveals the truth to everyone, Jed and Diane are both arrested. In addition, Typhon's CEO, Dennis Walker, resigns as the company's stock begins to plummet (although Leena's fate is left unknown). This presumably puts an end to Typhon's operations in Haven Springs as well as forcing the company to shut down.

During Gabe's future visions, memories of Typhon in the Black Lantern are shown disappearing and being replaced (possibly due to Typhon's collapse).