The Vortex Club is one of the oldest, most durable and influential social groups at Blackwell Academy. It originally started in the 1980's as a new wave rebellion against yuppie forces of the Reagan era and acted as a safe haven from peer pressure. It has now become an elitist and almost cult-like group for the popular party people of Blackwell. Its official leader is unknown, though Nathan Prescott and Victoria Chase are considered the two most prominent members of the Vortex Club. They are funded by Nathan's father, Sean Prescott. Most Vortex Club members seem to be friends or on friendly terms with each another. Many posters for the club are visible around the Blackwell campus.

Established during the 1980's, the Vortex Club was originally intended as a place of safety for individuals who felt sidelined, bullied or harassed by the popular cliques within the school. Some such individuals are said to be those who dyed their hair blue, computer nerds who got dumped into garbage cans, or male students who wore earrings and were bullied and beaten.

However, times have changed and "now every football player has two or three exotic piercings."[1] The original purpose of the Vortex Club became warped over time and has instead attracted the popular and elite folks it was once intended to shield students from, such as the likes of Victoria Chase and Nathan Prescott who are known bullies.

There is much publicity for the Vortex Club around Blackwell Academy, such as flyers that entice other students to seek membership. Some students who have no interest in the club see it as a cult. However, there are other students who see membership as a form of kudos which will work in their favor and allow them certain benefits on campus. The club is also seen as a stepping stone for unpopular students to become more accepted within the academy's social hierarchy and to escape the backstabbing that goes on there.

Max Caulfield can find a report called "Is The Vortex Club...A Cult?" from the The Blackwell Totem written by Juliet Watson.

Hayden Jones gives some insight into the workings of the club if Max chooses to speak to him. He mostly mentions how they just enjoy hanging out and chilling at parties. He heavily insinuates that most of the club's members partake in recreational drug use.

Max can use her rewind power to convince Courtney Wagner to let her on the Vortex Club guest list by asking her for outfit tips.

When Max and Chloe want to go swimming inside Blackwell's swimming pool at night, Max can find the Vortex Club VIP guest list near the pool, which allows her to add herself to the list and also remove someone that is unknown.

Victoria's student file mentions that she "receives high marks from faculty for her devotion to the Vortex Club among other organizations devoted to Blackwell's spirit and history".

When looking for Nathan, Max can approach the school's janitor, Samuel Taylor, in front of the Prescott Dormitory and talk with him about the Vortex Club. He says that Rachel Amber "saw right through" the club and warns Max that she should also stay away from it while she can.

Later in the evening, the End of the World Party is in full swing at the Blackwell swimming pool.

While at the Two Whales Diner, Max may comment on the Vortex Club flyers scattered on the floor: "The party is over. This vortex... is much bigger."

In the prequel, the Vortex Club is in its original state, an anti-bullying club for students to protect themselves. Victoria is not a member but claims that she is being "courted" by them and reveals she intends to turn it into a social club for Blackwell's elite.

The name "Vortex" has a few different associations. The first is the link to weather patterns, specifically a tornado; extremely appropriate given the oncoming the storm Max foresees from the beginning of the game. Tornadoes pull people in - as a result of being pulled in, you are 'spat back out' worse for wear, which refers to the toxic character of the club.

The use of the Vortex Club parties as a method for drugging potential victims as part of the Dark Room Conspiracy was predicted and alluded to in the first few episodes of the game.

Party flyer in the hideout in "Out of Time"

Party flyer in "Out of Time" 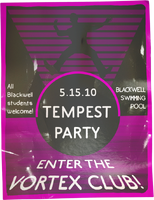