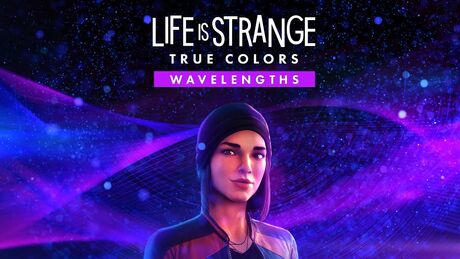 "Wavelengths" is a bonus episode set prior to the events of Life is Strange: True Colors, which features Steph Gingrich as the protagonist. It is included in the Deluxe and Ultimate Edition of the game, which released on September 30, 2021[1].

Official description:
"Step into Steph's booth as the all-new radio show host for KRCT: Haven's best - and only - radio station. Over four seasons, discover more about Steph's past and her relationships as she makes her mark on the record store, uncovers its secrets – and decides her future."

The story takes place one year before the main story. It begins with Steph entering the DJ room in the record store, where she remembers a conversation with the radio store manager recalling her first day working at the record store after quitting her band. After selecting one of the four songs to play, she begins by broadcasting the advertisements found on her desk and also updates her phone's dating app profile after this is done. Whenever she is in the booth, she also has the option to interact with the nearby objects such as the newton balls, the glitter lamp, the dancing flower, the bobblehead, and the sticky dinos (whatever can be found there). In the store, she can find gifts from Charlotte and Eleanor. At the front desk, there is a note with a list of things to do: set up posters, arrange CDs, and check a broken vent (to which Steph will taunt the animal, who is actually Valkyrie, inside it). After she receives a phone call from a male teenager inside the booth, she helps him predict his future. Steph then receives a package from Mikey North (another character who also previously appeared in Before the Storm) containing a notebook, a sketch, a game guide, a D20 die, and a note that says "You Ready?" with a sinister looking face. She then receives another call, but this time from the girlfriend of the earlier caller, who believes she's a psychic. She reluctantly predicts her future using the D20 to hint either a good or not so good future. After completing all the announcements and tasks, she calls Gabe using her cell phone. She expresses how stressful her new job is, but Gabe reveals that she is broadcasting her complaints. Embarrassed, she quickly provides a decent excuse over the radio to avoid humiliation.

At the end of June, after finishing a broadcast, Steph turns on a small fan to cool herself down from the heat. She then gets a call from a father requesting a song for his son. She heads to the backroom to find the requested song, only to find that the cabinet containing the song is locked. There is a clue that provides hints for the combination for the lock. She looks around for the records that match the clues. In the store, she also has the option of changing the tallies on a scoreboard and have a flashback of a time where she is playing a game of foosball against Gabe. Once she unlocks the cabinet, she begins playing the song on the radio. Steph also broadcasts some ads while answering two calls from people who also think she's a psychic, to which she uses her D20 to predict their futures. Once all the tasks are done, she proceeds to put away the store's decorations: a sign that says "Pride", some handmade signs, a tray full of badges, a poster, and two flags (the one on the front door must be taken down last). During this, she will remember past conversations with her old friends, including Chloe Price.

During Halloween, Steph remembers another past conversation with Gabe, who is concerned about Steph isolating herself from others. During her next broadcast, she reveals to have a scratch on her hand that she received from Valkyrie before declining a call from Mikey. While announcing some more ads and helping three callers predict their futures using her D20, she access her laptop at the front desk where she will find a list of tasks and an article either about Mark Jefferson or Arcadia Bay's destruction. The tasks include tidying up some comics and albums, finding a requested song on her email account, and cleaning up the trash in the back room. While doing these tasks, she remembers painful memories such as police sirens or the storm as well as either remembering the discovery of Rachel's body or her mother Lita presumably being killed in the Arcadia Bay storm (all of these will vary depending on which Max Caulfield sacrificed in the first game: Chloe Price or Arcadia Bay). She also has the option of listening to a radio in the side room, altering Ethan's drawing, and leaving cat treats for Valkyrie at a window or a corner. After she finishes everything, she calls Gabe and asks him for a drink, but she receives an email from Mikey, asking her to contact him. She heads to the backroom and contacts Mikey via her laptop. While playing a tabletop game with him, Steph remembers conversations involving Chloe, Rachel Amber, Drew North, and Mikey himself and she and Mikey will either talk about Lita and Drew's apparent deaths or Chloe and Rachel's deaths (again depending on what ending was received in the first game). When Steph complains about the pain that she experienced in the past (which is why she is keeping others away), Mikey explains that he just wants to be a part of her life. Despite this, Steph still cannot get over her pain.

At the end of December, after Steph has finished her broadcast, she gets a call from Gabe, who explains that he is prepared to see a family member that he had not seen in a very long time (who is of course Alex Chen). After Steph uses her D20 to predict his future, Steph then prepares to handle out some of her remaining tasks, which includes broadcasting ads and answering calls from Duckie and another unknown caller to predict their futures using the D20. She also finds a letter near the front door from Gabe, Ryan, and Charlotte inviting her to take part in a scavenger hunt. After finding seven clues, she finds her prize on a shelf in the backroom: a small dedication plate with her name and a note from the three. After everything is done, she then pops open a champagne bottle that Jed sent her to celebrate the new year.

The next scene briefly shows Ryan and Valkyrie in the record store (as shown in Chapter 1). Steph is also shown playing with a wooden sword. She then receives another call from a person asking her to predict his future. Steph points out that she has stopped doing that a long time ago. When the caller asks again, she provides an quick, unspecific answer before hanging up. After talking about Valkyrie, she plays a record and starts dancing to the music. Alex then appears outside the DJ room's window. As Steph picks up two records, she sees Alex, smiles at her, and shows her the records for her to pick, leading to the events of the main story.