Life is Strange Wiki
Register
Don't have an account?
Sign In
Advertisement
in: Gameplay, Gameplay (Season 2), Lore,
and 3 more

The wolf is a recurring symbol within Life is Strange 2. Although no actual wolves appear in the game, it is considered to be an animal representation of brothers Sean and Daniel Diaz. Following the making of any decision that brings consequences, an animation depicting a large and small wolf running together is displayed in the bottom right corner - the opacity of either wolf depends on whether a decision will impact Sean, Daniel, or both.

Throughout the first three episodes, Sean wears a hoodie with a stylized wolf logo emblazoned across its front. As the episodes progress, the logo becomes faded and develops several cracks.

At the end of "Roads", Sean tells Daniel a bedtime story about two wolf brothers on a journey which parallels their own. For the remaining episodes, Sean's bedtime story is used as a framing device for the episode recap segments, during which Sean's voice plays over animated watercolor drawings of the brothers as wolves.

While walking in the woods after fleeing from Seattle, after Sean tells him that "a Bigfoot doesn't need good shoes", Daniel replies that he'd rather be a wolf.

Later on, while camping out by Nisqually River at night, Daniel asks Sean if he thinks werewolves are real after noticing the full moon. Sean has the option of assuring him that they are the wolves; if he does so, they proceed to howl at the moon together. Later on, Sean can refer to the two as "the wolf brothers".

During their bus ride at the end of the episode, Sean tells a story about two wolf brothers and their papa wolf to Daniel, which mirrors their own situation:

"Once upon a time... In a wild... wild world... there were two wolf brothers... living in their home lair with their papa wolf."

In the opening recap sequence, Sean, Daniel, and Esteban are shown as wolves while Sean is telling a story that reflects the events of Episode 1.

While in the abandoned house, if Sean wins the game of Ship, Captain, and Crew, he has the option of drawing a wolf on Daniel's backpack.

While heading towards the Reynolds' shed in their backyard, Daniel reminisces on their time at the cabin and howls, to which Sean has the option of either joining in or telling him to be quiet.

During their stay in the Reynolds' guest room, Sean refers to Daniel as "Superwolf". Later on, Daniel adopts this as his superhero alias after befriending Chris Eriksen, and puts on makeup to resemble a wolf's whiskers.

In the opening recap sequence, Claire and Stephen Reynolds appear as wolves alongside Sean, Daniel, and Esteban while Sean is telling a story that reflects the events of Episode 2.

Before beginning their training session at the lake near the drifters' campsite, Sean has the option of howling with him; whether or not Daniel reciprocates depends on his relationship with Sean at that point.

If Sean goes to bed with Daniel instead of getting a haircut, Sean will continue the bedtime story reflecting recent events.

"...the little wolf wasn't so sure about the new pack. He didn't want his brother to run away with them... And so the little wolf would howl and prowl, not knowing what was going on..."

If Sean agrees to get a tattoo from Cassidy, he has the option of telling her to give him one depicting a wolf, which she obliges to.

In the opening recap sequence, Sean and Daniel once again appear as wolves while Sean is telling a story that reflects the events of Episode 3.

Jacob writes a note in Sean's sketchbook, referring to Daniel in code as his "Superwolf comic" that is waiting for him.

Sean will continue telling his story alone in the desert, talking to himself as he walks in the heat.

"So the... the wolf brothers were split apart... The oldest wolf was badly hurt... But nothing could stop the wolf from following his brother's tracks..."

In the opening recap sequence, Karen Reynolds appears as a wolf alongside Sean and Daniel while Sean is telling a story that reflects the events of Episode 4. The episode itself is also titled "Wolves".

One of the endings is titles "Lone Wolf". In the Blood Brothers ending, Sean's drawings show images of wolves.

According to the writer, Jean-Luc Cano, Life is Strange 2 does not share the spirit animal concept that was present in the original game. This was confirmed here.

The logo on Sean's hoodie. 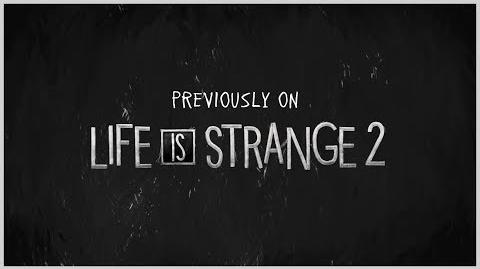 Previously on Life is Strange 2 - Episode 1-2

Previously on Life is Strange 2 - Episode 2-3